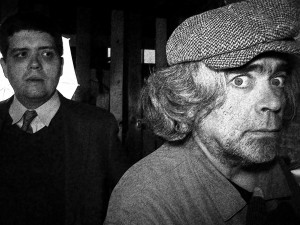 Have you heard the praise critics and audiences have been heaping upon the latest Curious Theatre Branch show, a revival of Harold Pinter’s “The Caretaker”?  Well, it’s fully deserved.  And now, only six performances remain to catch as fine a Pinter revival as you could hope to get, a confident and intelligent staging that nails Pinter’s complex musicality, but more importantly boasts three superb performances that demand to be seen.

In “The Caretaker,” which was first staged in London’s West End in April of 1960, we meet two brothers:  Aston, a mentally damaged yet gentle and lonely soul, and Mick, his neurotic and anger-fueled younger sibling who is the landlord of their dilapidated flat. One day, Aston brings home a down-and-out vagabond named Davies, a mysterious stranger who turns out to be an exception to that old saying “beggars can’t be choosers.” Because as Davies reveals more of his ungrateful streak, and unsuccessfully tries to play one brother against another in a misguided attempt to ingratiate himself permanently into their household, he ultimately overstays his welcome and is evicted despite his angst-ridden cries—”Where am I going to go? What am I going to do?”—that end the play.

“The Caretaker” has been interpreted to “mean” everything from a parable on the Old Testament to a comment on class struggles to an indictment on the welfare state.  This revival, which according to the program has been directed by the cast and Jayita Bhattacharya, who also stage-manages, has emphasized character and text, text and character, above all else. This masterful handling of Pinter’s notoriously precise dialogue and gaps between the words, all three actors communicating a shared understanding of the playwright’s vernacular yet making it their own in terms of individual cadencies—a remarkable achievement—results in a more straightforward reading of the play:  territoriality, primitive power struggles and the difficulty of outsiders breaking through family ties that bind.  This is fine with me.  “The Birthday Party,” in which a young man is forced out of his comfortable surroundings by two older men, was always the better power struggle play in my book. “The Caretaker,” with its series of redundant and darkly comic scenes that at times resemble little more than a roommate arrangement gone horribly wrong, always reminded me of a bleak “Odd Couple,” had Neil Simon, like Harold Pinter, been influenced by Ionesco and Beckett.

Nevertheless, it’s the performances that elevate this revival.  Beau O’Reilly’s edgy portrait of Davies refuses to sentimentalize his character, and his caustic line readings drive home Davies’ racist and conniving qualities. It also means that we feel little sympathy for him when he is being discarded like a used tissue paper, and perhaps makes a case for what some have said is Pinter’s cruel streak towards society’s victims and the less fortunate. As Aston, Colm O’Reilly turns out a mesmerizing performance of pure vulnerability. He possesses a soothing and powerfully understated vocal instrument, which he exploits to chilling effect in his delivery of Aston’s famous twenty-minute Act II monologue that recounts Aston’s experience in the mental ward.  You could hear a pin drop in the theater, the audience hanging on to every word. Clearly, Mr. O’Reilly could have a tremendous alternate career as a hypnotist.  And finally, Jeffrey Bivens as Mick, wearing a wife-beater, jeans and leather jacket, and sporting a five o’clock shadow and dark, Charles Manson eyes, is physically a Pinter casting director’s wet dream, a malevolent yet fast-talking Pinter charmer who occasionally reveals moments of piercing inner weakness.  All three gentlemen don’t act their roles as much as they fully inhabit them, and guarantee that the play’s two-and-a-half-hour running time flies by like nothing at all.  An excellent evening all around and showcasing acting of a higher caliber. (Fabrizio O. Almeida)