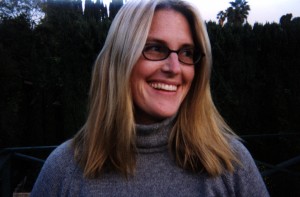 Bridget Carpenter’s “Up, ” opening next week at Steppenwolf, centers around a man whose greatest moment was decades earlier when he created a flying lawn chair propelled by weather balloons, and whose return to inventing in order to escape the demands of daily life impacts his family’s pragmatism and own dreams. Newcity spoke with Carpenter, winner of a Guggenheim fellowship and a writer and producer for “Friday Night Lights,”  the week before the play opened.

I couldn’t help but notice that your play is showing during the same time as Pixar’s animated film by the same name. I thought that was a major coincidence, although your play was actually first produced in 2002.

Under other conditions I might feel exasperated. In fact, I just saw the film, and it’s a wonderful, beautiful movie… so it’s more serendipitous synchronicity in this case. I actually thought it was amazing that the two stories aren’t at all the same story and don’t come from the same inspiration, but they’re both about dreams and wishes—and that I found surprising and didn’t bother me in the least. The singularity of the image of being released from the earth and gravity resonated with me.

When researching your work, I noticed one of your more recent plays is called “Fall,” and I’m interested that you approached that motif first—is there any kind of through-line between the plays?

There’s no actual through line, though I do find myself being drawn to that idea. “Fall” actually took place at swing dance camp…. I did the Lindy Hop for many many years, and every time I would go dancing, I would always think, “This is better than any play I’ve ever been to.” I thought if I could capture these dances and put them on stage, it would result in a great play, and I was dreaming about a story where I could feel a lot of Lindy Hop and the falling and the flying. And then “Fall” of course became about falling in love and releasing and letting go into a type of magic. But I think “Fall” is a coming-of-age story whereas “Up” is older, more of a surprising second path of life than one’s whole life spread out. I’m also a sucker for one-word titles.

“Up” has been produced a few times now… what’s struck you as new or surprising during your observation of rehearsals at Steppenwolf?

I’m always struck and was particularly struck this time by the character who walks a wire throughout the play. We have an incredible, real wire walker for this production (Tony Hernandez), with a wonderful history, a child of the circus who married into a famous family of wire walkers. My heart leapt when I got to meet him and see his amazingly riveting and graceful work. I’m a kid from California who didn’t have an early theater life, but when I discovered it in my twenties, being at Steppenwolf was something I dreamt about. Like any play rehearsal, it’s always new, and I never feel jaded. The adrenaline and the nerves and the opportunity are like going to a dance for the first time.