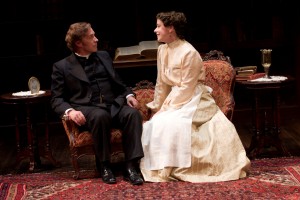 Composer Joshua Schmidt scored a surprise hit with Next Theatre’s “The Adding Machine,” so much so that the show went on to have an off-Broadway New York run.  Meanwhile, Schmidt has continued creating sound designs and scoring music on demand for various venues and shows around town, as he has for years.  “A Minsiter’s Wife” is Schmidt’s second full-scale musical-theater piece, based on George Bernard Shaw’s “Candida.”  The idea to adapt Shaw’s triangular romance to music belongs to Writers’ Theatre artistic director Michael Halberstam, who commissioned the work and was originally planning to write the adaptation as well as direct it, but wisely realized that was too daunting a task, and so Austin Pendleton was brought in along with Jan Tranen to write the lyrics.

The end result, in its world-premiere production at Writers’ Theatre, has much going for it, to be sure.  The performances are strong, audience involvement high, the music well-crafted.  Even so, the end result is wanting and feels more like the workshop presentation of a work-in-progress than a finished piece.  When Kevin Gudahl enters in silence at the opening and talks to the audience about his sermon and mouths Shaw virtually word for word, all is well.  Soon, and without reason or warning, he is singing his sermon in a rather sing-song manner which suggests a patter song, but without lyrics punchy enough to compete with the more literal Shaw sections.  And so it goes; truncated sections of Shaw end up seemingly interrupted by sung recitative, rarely with aria (some of the music for Candida, sung by Kate Fry, the best singer of the cast, is an exception).  Think of it as late Stephen Sondheim, say of the “Passion” period, with the same kind of character counterpoint, but again, without Sondheim’s principal talent, which has always been his first-class lyrics, although in this case, showcased alongside of Shaw’s prose, against which Sondheim or even his mentor Oscar Hammerstein would pale.  There are sections of the piece that are through-composed enough as to suggest chamber opera, though these are rarely the story’s most dramatic moments.

But the work does indeed confirm what an extraordinary talent Schmidt is, although given the limitations surrounding him, at least on a single hearing, I felt myself thinking more about the craft of what Schmidt was doing than ever being lost in the emotions that his music was attempting to convey.  What appears needed is focus and perspective: if this is indeed the story of “A Minister’s Wife,” as the title suggests, why follow Shaw so literally?  Tell us the story from her side, from what she feels, from what she thinks, and set all of that to music, and then it could well end up as Henry Higgins might say, “By Jove, I think they’ve got it.”  (Dennis Polkow)