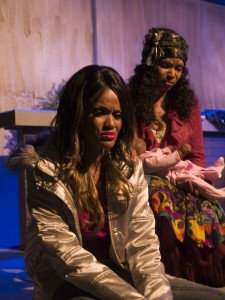 After her husband’s assassination, Coretta Scott King continued to be a pillar of support for the civil-rights movement. In the Eclipse Theatre Company’s “A Song for Coretta,” five women gather at her funeral to draw strength from the civil-rights icon and to share their own stories.

The ensemble is uniformly strong; the generational conflict between conservative Helen and combative Keisha is spot-on. While the script hits some clunkers (the writing and staging of two climactic stories are strained), it’s an affecting assessment of the success (and failure) of one community’s struggle. (Lisa Buscani)