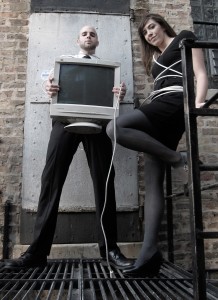 This two-person show, which follows a sketch-comedy format, is entertaining but ultimately far less interesting than actually reading the Craigslist website, which is itself already a wonderfully interactive, risk-taking performance. “Craigshow” is chock-a-block with obvious puns that illustrate what are essentially readings of Craigslist ads—for example, stuffing spam into each other’s mouths while reading off spam job descriptions, or using hardboiled eggs to illustrate an egg-donation sketch. Megan Maile Green and Shawn Bowers play off each other well, and they’re  adept in the genre, but as the show goes along, it becomes more and more obvious how little work they had to do to bring the Web site to life. Individual scenes often feel like they could have been imagined backstage twenty minutes before curtain, and it’s hard not to notice that most of the ads depicted come from the last month or so. While a fever pitch in getting through bits does sustain energy, the “Taboo” buzzer they hit to demarcate the separation between bits feels lazy and allows Green and Bowers to avoid creating a through-line for the show. Audience interaction is stilted when it happens: “What good thing happened to you today?” one actor asks audience members, to try to cheer up the author of a desperately lonely personal-ad writer. The show finally ends with an  autobiographical story about falling in love online with a CL con artist, which hits an  ambivalent note that’s far more intriguing than the rest of the show. (Monica Westin)