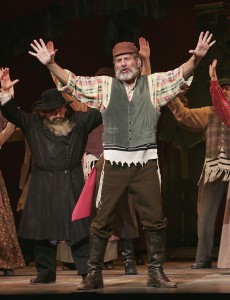 When Israeli actor Chaim Topol first played Tevye in “Fiddler on the Roof” in Tel Aviv back in the 1960s, he was a young man in his twenties, still on active duty for the Israeli Army.  Yet as the son of Polish-Russian Jewish parents who, like the fictional milkman Tevye and his family, had been forced out of Eastern Europe, Topol transformed the role from the purely comic interpretation originated by Zero Mostel on Broadway to something more poignant and truer to the musical’s original source material, the Yiddish short stories of Sholem Aleichem.  Despite his relative youth, Topol’s portrayal was so authentic and invigorating that he was chosen to open in the role on London’s West End, which led to director Norman Jewison choosing him to star in the 1971 film version, despite enormous studio pressure for Jewison to go with an older and more established bona fide movie star.

Some twenty years later when Topol had reached his early fifties, at long last the actual age of the character Tevye, he embarked on a national tour of “Fiddler”—including a memorable stop here at the Civic Opera House—that would later land on Broadway, and he would go on to reprise the role in London in 1995, his real-life daughter playing his daughter.  Now 73 years old, Topol began an international tour in January that is being billed as the “Topol Farewell Tour.”

Having seen Topol perform this role at virtually every stage of his career, I was fascinated to see how he would approach it after all of this time.  The applause that greeted his entrance before he uttered a word would be the envy of any stage performer, but then, how often do you see someone perform a role live that on film has now reportedly been seen by over a billion people?  Indeed, because of the film’s enormous and enduring popularity, there are audience members that insist on virtually mouthing every word that Tevye utters right along with Topol as he does so, right down to the same affectations.

You might think that this would indicate a “phone in” performance on Topol’s part, but quite the contrary.  In real life, Topol has always been more slender than the character (he used to be padded), but apparently feels no need for such affectations at this stage of his career.  Nor does his beard need to be whitened any longer, nor does he have to “walk old.”  Thus, with his straight posture and his direct involvement with the cast and the audience, the most amazing thing is that you are never able to predict exactly what Topol will do, no matter how well you may know this play.  His voice is more gravelly, his singing more controlled, and his involvement in the part reflects a lifetime of not only inhabiting this role and all that it represents, but as an Israeli Jew, and a family man himself, a lifetime of balancing the “Tradition” of the show with the realities and challenges of everyday life.  (Dennis Polkow)

I have never been compelled to write about someone- a wonder actor. We had the privilege to see Topol in his Farewell tour at the Baltimore Hippodrome Theater. We had seen him in Pittsburgh a “few” years ago. What a reception he recieved at both places. For years I have recited many of the lines that are in “Fiddler” and I have to say when I was in Baltimore, it was really hard to contain myself. I was ready to get up there and dance right along with him. My only regret was that I couldn’t get a picture of… Read more »