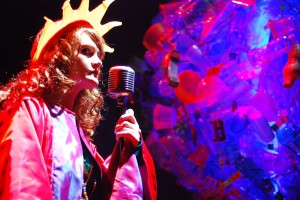 Chic and deadly, where lavish style adds layers of significance to a sometimes hurried production. A beautifully garish garbage playground that comprises the set suggests the imminent decay of Oedipus’ kingdom, while costumes and props make subtle but smart reference to ancient Greek theater. To say that the show is somewhat superficial by nature isn’t a criticism; the Hypocrites seem to be suggesting the arbitrary and impossibly stark nature of identity and fate for Sophocles, as well as the literal wasteland that the play creates (so that Oedipus’ daughters who come to comfort him at the end of the play are portrayed by empty dresses). It’s both intellectually hip and a magnificent visual spectacle—scenes of Oedipus threatening a feather-crowned Theseus with a staple gun or Jocasta drinking bleach while singing a lounge song into a microphone inside an open port-a-potty do not fade for a very long time. The acting manages to be both ferocious and controlled enough for dialogue to slip between theatrical decrees and lightning-quick comic asides. Sometimes  lines are a bit too fast, as though characters were racing to get the story down before time runs out, and it’s a whirlwind fifty-minute production, but the mania also helps knit together wild transitions between banter and horror. Even the language maintains a tightly controlled balance between high classical language and casual modern prose: “We’re all set, thanks,” Jocasta snaps at the messenger whom she senses will reveal the terrible truth. Actors and audience share the stage, which feels increasingly claustrophobic throughout the show, implicating the audience as chorus, as potential suspects of Laius’ murder, and finally as only more conspirators in the tragedy. (Monica Westin)