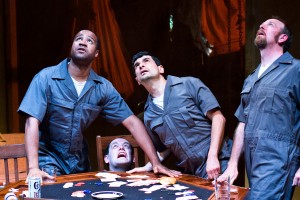 A veritable buffet of intellectual treats for the the theater geek, with obvious influences from Pirandello to Stoppard and lots of fun plays on conventions of theater and the death of the author. Company member Jeff Dorchen’s play is incredibly smart, it’s absurdist and it’s got protagonist Saul Bellow stumbling into Neil Simon’s “Odd Couple,” a Machiavelli with a South Bronx accent, and the University of Chicago neo-con Allan Bloom being led around on a leash. At the very least, “Strauss at Midnight” is probably the boldest production you’ll see this year. The plot is impossible to parse in full but generally follows the logic of conspiracy theory, the plot of Dante’s Inferno (where Virgil is Virgil Tibbs, police detective from “In the Heat of the Night”), and the overall theme of paranoia and a total breakdown in systems of meaning-making. Because of the wonderfully strange free-associative arc of the show, each moment is drenched with theatrical potential and incredibly exciting for most of the production. Terrorists hold up the set of “The Odd Couple” with bagels; an elaborate fantasy of great Jewish conspiracy is staged around a poker table, with participants in bizarre masks shaking poker chips. But after awhile, a gnawing sense of “so what?” grows—at two and a half hours, the show is undeniably a bit too long for its aims. When characters experience increasing numbers of timewaves that change the conditions of their existence every few seconds, it creates a world that’s evolving so quickly there’s no reason to try to accomplish anything—which makes for a useful allegory but a difficult narrative to watch after awhile. And like most plays where most of the pleasure comes from being in on referential jokes, it’s an indulgently entertaining experience for the nerdy, but not without an uneasy suggestion of vanity at the root. (Monica Westin)