Here’s the press release from the MCA:

The Museum of Contemporary Art (MCA), Chicago, announces the 2009-10 MCA Stage Season of contemporary theater, dance, music, and multimedia performances. Additional theater and music programs will be announced at a later date. All MCA performance tickets also include free museum admission for up to a week following the performance. Tickets are available mid-July at the MCA Stage Box Office, 312.397.4010 or www.mcachicago.org. 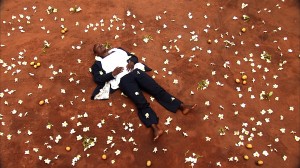 Nora Chipaumire with Thomas Mapfumo and The Blacks  Unlimited: lions will roar, swans will fly, angels will wrestle heaven, rains will break: gukurahundi
October 1, 3-4, 2009
As exiles from Zimbabwe, dancer/choreographer Nora Chipaumire and master musician and poet Thomas Mapfumo challenge the accepted African branding – war-torn, tribal, and exotic. Known as the “Lion of Zimbabwe,” Mapfumo created and made popular the Chimurenga style of Shona music from Zimbabwe that mixes African rhythms and instruments with politically charged lyrics, which landed him in a  Zimbabwean prison camp in 1979. Chipaumire, a contemporary dancer rooted in African traditions, fuses her powerful and raw movement with Mapfumo’s music and incendiary writing to examine the migrant experience of Africa and the art of Zimbabwe over the course of that country’s downward economic and political spiral.

Lucinda Childs: DANCE
October 15-17, 2009
Known for her minimal elegance, Lucinda Childs is a pioneer of the postmodern dance movement and a founding member of the Judson Dance Theater. Her landmark work DANCE, for which Childs was awarded a Guggenheim Fellowship, is a collaboration with visionary contemporaries, composer Philip Glass and artist Sol LeWitt. Being reprised on its 30th anniversary, this production integrates Childs’ polished choreography with LeWitt’s black-and-white film, which is projected in front of the stage in perfect synchronization with the live dancers.

Philip Glass: An Evening of Solo Piano
October 16, 2009
One of the most influential composers of the 20th century, Philip Glass is an extraordinarily prolific figure known for his meditative and hypnotic musical scores. He has collaborated with Paul Simon, Linda Ronstadt, Yo-Yo Ma, Twyla Tharp, Allen Ginsberg, Woody Allen, David Bowie, and Chuck Close, among many others. In the past 25 years, Glass has composed more than 20 operas; eight symphonies; two piano concertos; string quartets; and soundtracks to films, including the Academy Award-winning motion picture The Hours, Martin Scorsese’s Kundun, and Koyaanisqatsi. This program features an intimate evening of Glass performing from his growing body of work for solo piano.

The Hypocrites: Frankenstein
October 21 – November 1, 2009
In an adventurous retelling of Mary Shelley’s classic novel, acclaimed director and The Hypocrites founder and artistic director Sean Graney combines live performance with the classic 1931 film with Boris Karloff. Graney’s four-actor, multimedia, promenade production is timed well for Halloween and places the audience onstage amidst the actors and the film. This inventive play combines several historical versions of the gothic tale to craft a contemporary literary monster that captures the pure horror and chilling philosophy of the creation myth, wherein the creation ultimately destroys its creator.

Anna Halprin / Anne Collod & Guests: parades & changes, replays
November 5, 7-8, 2009
French choreographer Anne Collod boldly re-creates Parades and Changes, the most famous production of American postmodern dance legend Anna Halprin. Utilizing a unique approach, Halprin writes dance scores, or instructions for the dancers on what to do, which allow the dancers to decide how they do it. In Parades and Changes, dancers perform several parades and rituals, including the ritual of dressing and undressing. When it premiered in New York City in 1965, the work was banned for its nudity. Collod’s re-creation, parades & changes, replays, pays tribute to the original’s enduringly modern motifs and features a cast of performers who are established choreographers and dancers in their own right. Presented in tandem with the MCA exhibition of Daria Martin’s film Minotaur.

Don Byron: The Music of Mickey Katz
November 14, 2009
For this concert, Don Byron gathers his original nine-member all-star band, including trumpeter Dave Douglas and pianist Uri Caine, for a revival of his groundbreaking 1993 recording, Don Byron Plays the Music of Mickey Katz. The performance is a faithful tribute to the campy wit and musical innovation of klezmer-style music by Mickey Katz, a touring and recording star of the 1950s, who entertained audiences with his virtuoso clarinet and wild pastiche of ethnic Jewish comedy. This program is presented in partnership with the Chicago Humanities Festival as part of this year’s theme “Laughter.”

International Contemporary Ensemble (ICE): Kaija Saariaho
November 19, 2009
Kaija Saariaho, a composer of immense imagination and one of the best-known female composers in the world, joins the intrepid International Contemporary Ensemble (ICE) for a concert dedicated to her chamber music. Known for the lyrical, spiritual, and timeless qualities of her music, Saariaho spent years living like a musical hermit at the electronic music think tank IRCAM in Paris, an institute for scientific study about music and sound, and for the development of avant-garde electro-acoustical art music. Always adventurous in their collaborations, ICE is known for their exceptional talent, fearless choices, and for conquering the New York music scene while maintaining their base in Chicago.

Akram Khan Company & National Ballet of China: bahok
February 26-28, 2010
Acclaimed choreographer Akram Khan’s newest work, bahok, named for a Bengali word meaning “carrier,” explores the ways in which the body carries national identity and a sense of belonging. Culled from disparate cultures, traditions, and dance backgrounds – Chinese, Korean, Indian, South African, and Spanish – Khan’s eight dancers play passengers stranded in the limbo of an airport or train station. As they try to communicate to share “the things they carry with them” – their experiences, their memories of home, and the dreams and aspirations that made them move – the rich mix of backgrounds push the boundaries of spoken and dance vocabularies. Award-winning composer and long-time collaborator Nitin Sawhney creates an original score for bahok.

Young Jean Lee: The Shipment
March 26-28, 2010
One of the boldest voices in contemporary theater, playwright and director Young Jean Lee tackles the Black experience and African-American identity politics in her new play, The Shipment. For this work, Lee, a Korean American, challenged herself to create a “Black identity-politics show,” addressing social norms that she herself finds uncomfortable. The result is a provocative and eclectic work, which includes song, dance, stand-up comedy, sketches, and a short drama, performed by five talented actors who show off Lee’s acid wit and subversive style.

MCA Stage
As the Museum of Contemporary Art’s program of performing arts, MCA Stage is a nationally recognized presenter of contemporary theater, dance, music, and multimedia performances. Featuring leading performers from around the globe, including Chicago’s most innovative artists, MCA Stage is the most active interdisciplinary performing arts presenter in Chicago. MCA Stage enjoys working year round with numerous arts and community organizations for the co-presentations of the performing arts, making the MCA a shared resource for the cultural life of our city. MCA Stage celebrates artists and their creative process, connecting audiences with artists in meaningful discourse with its Artists Up Close series of post-show talks, panels, roundtable discussions, workshops, and residencies. Audiences at MCA Stage performances receive one free museum admission with each ticket stub on the performance date or during the following week. For information and tickets, call the MCA Box Office at 312.397.4010 or visit www.mcachicago.org.

Generous support for the 2009-10 season of MCA Stage is provided by the Alphawood Foundation and the Hugh M. Hefner Foundation. Dance performances are supported by David Herro and Jay Franke.  Air transportation is provided by American Airlines, the Official Airline of the Museum of Contemporary Art.

The Museum of Contemporary Art, Chicago (MCA) is a nonprofit, tax-exempt organization accredited by the American Association of Museums. The MCA is generously supported by its Board of Trustees, individual and corporate members, private and corporate foundations, and government agencies including the Illinois Arts Council, a state agency, and the City of Chicago Department of Cultural Affairs. The Chicago Park District generously supports MCA programs. Air transportation is provided by American Airlines, the Official Airline of the Museum of Contemporary Art. The MCA is located at 220 E. Chicago Avenue, one block east of Michigan Avenue. The museum and sculpture garden are open Wednesday through Sunday from 10 am to 5 pm and Tuesday from 10 am to 8 pm. The museum is closed on Monday. Enjoy free admission every Tuesday. Suggested general admission is $10 for adults and $6 for students and seniors. Children 12 years of age and under, MCA members, and members of the military are admitted free. Information about MCA exhibitions, programs, and special events is available on the MCA website at www.mcachicago.org or by telephone at 312.280.2660.