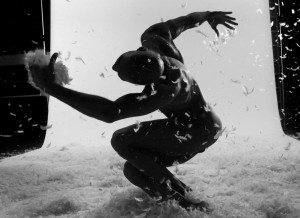 A panel of experts selects a dozen talented applicants from a pool of hundreds to compete for a sizable cash prize. The chosen contestants—all disciplined, all deserving—must appeal to the audience, who will select the winner via popular vote in what is perhaps the only lasting example of pure democracy in action. “The A.W.A.R.D. Show!” (the title a sly blend of acronym-happy high-ish culture—Artists With Audiences Responding to Dance—with that retro, low-culture Pavlov bell of excitement, the exclamation point) started in New York three years ago, bringing the game-show format to contemporary dance as a vehicle for audience feedback, dialogue between artists and sorely needed funding. Only in this case, the public doesn’t get to gawk at the supercilious, deluded and awkward in the initial auditions; only the best go on display. This year the show goes national, with editions in Chicago, Philadelphia and Seattle. One winner in each city will take home a cool $10,000 toward the creation of new work.

Chicago’s contestants include the expected heavy-hitters, faculty from the dance departments at Columbia College and Northwestern—e.g. Carrie Hanson, Molly Shanahan—along with plenty of fresh young blood. The full list, which may be found on the Dance Center web site, is primarily comprised of artists who have a history of making distinctively challenging but (at least in my opinion) fairly accessible work. Phil Reynolds, executive director of the Dance Center at Columbia College which hosts the event, believes the interactivity of “The A.W.A.R.D. Show!” might appeal to audiences who wouldn’t normally go out to see contemporary dance.

“They’ll have the opportunity to engage with the artist in a different way, not only in voting for a favorite, but through a moderated conversation with the artist,” Reynolds says. “And a reception is held after each performance in which audiences can continue the conversation in a less formal way.”

The formal conversation occurs at the close of each performance, moderated by Columbia College dance chair Bonnie Brooks. All four choreographers will take the stage to field audience questions. These talk-backs (incidentally, a regular feature of Thursday night Dance Center performances) invariably bring out both the best and most cringe-inducing questions from the dance-watching public. Who this mass of humanity—for better and worse—chooses as winner is sure to be one of the most interesting parts of the spectacle. (Sharon Hoyer)