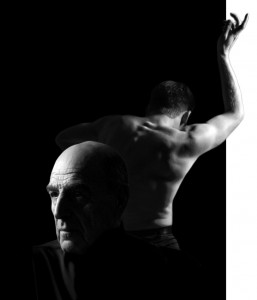 In his inviting apartment overlooking Lincoln Park, I had the pleasure—and not a rare one, judging from his warmth and affability—of talking at length with choreographer and dance legend Paul Sanasardo. Despite his intention to retire almost two decades ago, Sanasardo’s new piece, “Sleepless Nights in the City” plays this weekend at the Ruth Page Center—it’s the second piece he’s choreographed in two years for dancers at Joel Hall. The new work is inspired in equal measure by his dancers, for whom Mr. Sanasardo holds tremendous respect, the city of Chicago, the paintings of Edward Hopper and reflection on subjects that have interested him over the course of his long and fascinating career.

As a young man attending the School of the Art Institute of Chicago, Sanasardo never intended to be a dancer. “I wanted to be Picasso; I saw a future in painting, not in dance. But I hadn’t seen Jose Limon, I hadn’t seen Tudor,” he says. “I had no idea.” Dance as a career came later, after he served in WWII, thanks to the urgings of influential teachers. In New York, he went on to study with Graham, to choreograph for Ailey, to direct Batsheva. He talks about the unique work of Jerry (Robbins) and Bob (Joffrey) with great affection.

Discussing his new piece, Sanasardo gestured to a small framed print to my right; it was the famous image of a sleepless trio huddled over their coffees in a brightly lit corner diner. “You see that painting there, that’s Hopper: ‘Nighthawks’,” he tells me. “When I went to the Art Institute, it owned the painting even then. At the time, Hopper was eclipsed by Abstract Expressionism, but I’ve always liked Hopper, even though my own painting at the time was more abstract. They had a Hopper show here a couple years ago and I thought, you know, I’ll do a show about the city. A lot of it is based on Hopper’s paintings [though you wouldn’t necessarily know that]. I’m even using some of his titles; he named a lot of paintings according to the time of day. My first section is midnight, then 2am,  3am,  4am and then dawn.

“The opening, midnight, is the hour of the drifter—people who don’t want to go home, looking for a hookup. Some nights, looking out my window, I’ll see a lone biker heading into the park,” Sanasardo half-gestures toward his dining-room window. I gaze out over the greenery in the park, lush from prolific rains, as he continues. “I’m sure it’s all very innocent, but it can look quite spooky. So my second section is the prowler. 3am is the hour of the somnambulist—it’s an eerie scene about our inner life.” Here Sanasardo pauses momentarily, delving inward then continuing with a tone of quiet wonder. “Sometimes our dreams and our disturbances give another dimension to reality. 4am, according to Ingmar Bergman, is the darkest hour, so that’s the hour of the predator; there’s a homeless woman and there’s a small rape scene. And then of course dawn is dawn: it’s the hour that evokes eternity; life starts again…it’s beautiful. Sometimes when I can’t sleep, from my roof—I have a wonderful roof here—dawn is breathtakingly beautiful over the lake. If it’s a clear day, the sun pops over the lake like a fireball.”

The first half of the program is choreographed by Dmitri Peskov, formerly assistant director and principal dancer in Sanasardo’s company. Peskov, an accomplished poet, takes inspiration from the Stray Dog Cabaret, a gathering place for artists in pre-revolutionary Moscow. Of Peskov, Sanasardo says, “Dmitri is an extravagantly bright, bright young man. He works in a vein that interests me; it’s very intense. He is a poet, but he’s a poet of the dance as far as I’m concerned.

“All art should be poetic,” he continues. “Poetry digs beneath the surface of life; it talks about our inner world’s connection to the outer world. What made modern dance—we never liked the title, by the way—was the individual. It comes from the way a particular individual moves, how they reflect on traditional movements from a particular point of view. It’s the individual bringing an inner world that’s never going to happen again. You have an inner world all your own. If one can bring that to art, that’s so beautiful.”