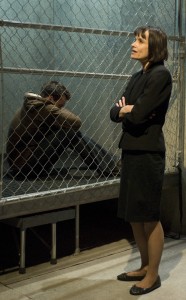 Griffin Theatre Company’s “Little Brother” handles the debate over civil rights vs. national security with techno savvy. It’s a balanced look at the way freedom erodes in dangerous times, and technology’s role on both sides of the argument.

Technophile Marcus (Mike Harvey) has a history of mischievous hacking. But after the Bay Bridge is bombed by terrorists, he is detained by the Department of Homeland Security and his civil rights trounced. Released, he returns to find DHS tracking suspects via debit cards and bus passes, transforming his community into a police state. He vows revenge and sets out to systematically thwart the department’s activity.

The second act drags and the detailed revenge plot’s techno-babble made my Luddite eyes glaze over. But Dorothy Milne’s direction keeps the pace from flagging and all the small, clever ways David brings down Goliath have an “ain’t it cool” quality to them. (Lisa Buscani)