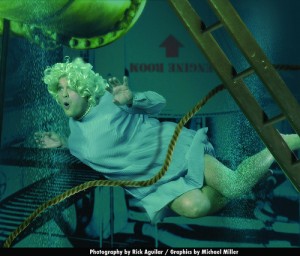 The book switches between a New Year’s Eve “Poseidon Adventure” fan fest to the arc of the movie itself. Fans comment on the action and then play the characters they pretend to be. The cast attacks the songs and story with energy and appetite, like Shelley at a cruise-ship buffet. Trista Smith is a real boost in the keester as the ship’s resident tramp; the ever-reliable Ed Jones is a giggle as flakey musician Nonnie.

The film/play integration can be awkward at times, and the fans’ monologues drain the energy from the overlong piece. Fortunately, “POSEIDON” has energy to spare. It has all the trademark HIAH camp and kitsch plus a little uplift at the end. Which never hurts. (Lisa Buscani)