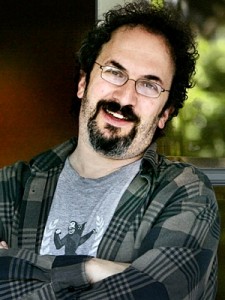 “Guess what I’m going to say: Bears or Bulls,” quizzes comedian/veteran TV writer Robert Smigel, baiting the capacity crowd to shouts of “Bulls!”, “Bears!” and “Hawks!” while he holds a fifteen-second long note: “Daaaaaaaaaaa…Bulls.” An oblivious audience member whispers, “He really does kinda sound like one of the Superfans,” not knowing Smigel really was the guy sandwiched between Chris Farley and Mike Myers on SNL’s classic “Bill Swerski’s Superfans” skit. The same guy seems preoccupied, “When’s he gonna bust out the Triumph?”

Smigel and “Morel Orel” creator Dino Stamatopoulos stop by Lakeshore Theatre for one of the “Just for Laughs” festival’s most intriguing concepts: to show their original “TV Funhouse” pilot, a parody of the “Bozo the Clown” children’s show, specifically Chicago legend Bob Bell’s incarnation, who Smigel admired because “he was clearly not taking the job seriously.” Smigel readies his rejected FOX sitcom, explaining that the family-packed crowd in the episode had little-to-no idea of the show’s comedic intentions. The film rolls-Smigel plays “Prozo,” a pretty much dead-on re-creation of Bozo, mixed with a little Krusty the Clown and a bottle of whiskey. Stamatopoulos plays “The Mysterious Wizzy,” some ridiculous genie character with a two-foot mustache. Gags like the “If You’re Jewish and You Know it” sing-along are funny in and of themselves, but they become priceless as the camera pans to the befuddled moms and dads who look around nervously.

After the showing, Smigel very nonchalantly announces that Adult Swim is considering reviving the show, and he wants to film it in Chicago. Suddenly, the mood changes—the crowd is a focus group, and it has opinions! Cartoon Network wants to keep children out of the audience, Smigel says. “No! No adults!” the focus group replies. (Andy Seifert)