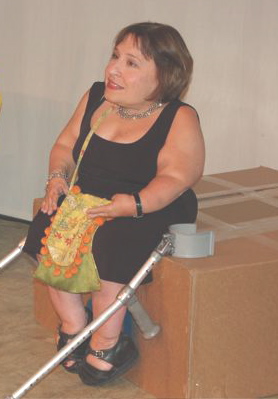 “In Your Facebook,” Tellin’ Tales Theatre’s new solo performance show about the pros and cons of Facebook addiction, opens with a social agenda of its own. Although Live Bait Theater and its Fillet of Solo festival are now gone, Tellin’ Tales Artistic Director Tekki Lomnicki hopes to continue the legacy of solo performance theater. “I just didn’t want that spark of Solo beauty to die,” says Lomnicki, the Fillet of Solo veteran who came up with the concept for “In Your Facebook.” Lomnicki explains that she was inspired by her recent experiences looking up old boyfriends on Facebook. Convinced that the “national phenomenon” of Facebook had affected everyone, she thought it would make a great theme for a solo performance show and that now would be “a hot time” to do it, before the Facebook craze faded. Lomnicki recruited several local solo performers to join the act, including Neo-Futurist and “Facebook Me!” author Dave Awl, who Lomnicki “met” when he friended her on Facebook. “In Your Facebook” consists of four twenty-minute acts, in which each performer—in addition to Awl and Lomnicki, Barrie Cole and Beth Ann Bryant-Richards—tells a story about Facebook, and takes a different angle on the role that the social-networking site plays in their lives. Performers describe experiences that run the gamut from fearing Facebook and staying away from it, to becoming so absorbed with the site that one becomes trapped inside. “People should see the show because they will be able to laugh at themselves,” Lomnicki says. (Ilana Kowarski)