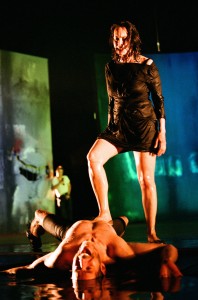 We received the following response to Goodman’s cancellation of Joan D’Arc this morning from the artistic director for the performing arts at 2009 Linz European Capital of Culture. (The European Capital of Culture is a one-year designation of a showcase city by the European Union.) In the email, Airan Berg takes strong exception to the Goodman’s characterization of the show as “not ready” and suggests “censorship” on the Goodman’s part and pledges to “take all necessary steps to present the work in Chicago.” Needless to say, this is an unusually strong manifestation of “artistic differences.” We’ve asked Goodman for their response, if any, and will add it to the mix when we get it.

Below is the email from Berg in its entirety and original form:

my name is airan berg, i am the artistic director for the performing arts at the european cultural capital, linz, austria 2009.
in this capacity I am also the main producer of JOAN DARK and responsible for the collaboration with the Goodman Theatre.

we strongly reject the the goodman theatre statement that JOAN DARK was not ready or needed further time for artistic development.
The production was a tremendous success with audiences as well as critics, especialy with the major quality national newspapers. (see below)

I have been producing international coproductions for the last 20 years, working with diverse theatre companies and prestigious institutions from all continents.
not all were easy, but I must admit, I have never experienced anything like this before.

the cancellation by the goodman theatre has been made without any consultation with us and comes as a complete surprise.
actualy only one  “artistic staffer”  was here for the final rehearsals and premiere. and there was absolutely no talk about the “show not being ready”.
normal meetings were held after the premiere about the technical solutions for the transfer to the goodman.
during the final rehearsals the “goodman staffer” did not express any dissatisfaction or any wishes for specific changes or adaptations, which would be normal in any production process.

robert falls has not seen the production nor did he have any real contact with any of the artists during their 8 week rehearsal period in chicago.
it was his desire to become partner in this production, especialy to create a new energy for the goodman and to create new audiences for his house.
this production would certainly do that in it’s mixture of political content, powerful visual direction, a strong physical ensemble, extradordinary live music, and three fabulous gospel singers.

we do not believe that the cancellation has anything to do with the production being ready or not, as JOAN DARK proved itself to be successful to a highly diverse international theater audience
in a competetive theatrical environment.
we can only speculate about the true reasons of this unbearable form of censorship of a highly political theatrical performance that deals with the topics of power, religion, and race.
we feel, as the show is ready, it would have been right to allow the audiences and you, the critcs, to decide.

this situation is not acceptable to us and we will take all necessary steps to present the work in chicago and to protect the artist’s and our own reputation and our investment in the production, which we see damaged by the goodman theatre.

we hope for an appropriate correction in your medium.

Reviews: Rough Translations / can provide the complete reviews if wished:

“Director aida karic successfully transposes Schillers heroine of freedom into the afro-american milieu in the USA.”

“… this production has great intensity and packing moments. Schillers drama is only one layer in this serious examination of fanatacism today, which has it’s roots in hopeless living conditions.
the two different worlds of the classical enlightment drama of schiller and the postmodern joan dark have one thing in common, the will to freedom.
it manifests itself in terrible beauty.”

“A high mass to holy war: Joan Dark, a powerful interpretation based on Schiller”

“It is the performers from the goodman theatre who carry the power of the production…Schiller’s text, usualy laden with pathos, is abridged,
however it is translated into the bold physicality of the performers ”

“Aida Karic transformed Schiller’s “the maiden of Orleans” to todays times and created a highly political play….
she places emphasis on the concurrence of text, light, and music, and reaches the audience on all levels.”

“Okwui Okpokwasili is not a god fearing virgin in armament, but a pistol swinging urban rambo full of rage”

“Joan Dark is an action laden performance about about violence, fanaticism, and power.”

“In this production we encounter a militarised, but also highly mediaised society, in which the combination of religious fanaticism and nationalism create an explosive mix.
other elements offer comfort. the gospel singers with their emotional musik offer insight into the depths of the souls of the characters.
live music underlines the narrative. boisterous applause”