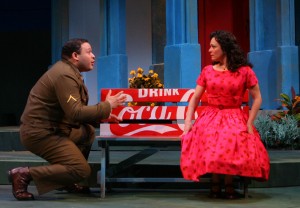 “Boleros for the Disenchanted,” at the Goodman, is an unremarkable new play by a remarkable playwright (Jose Rivera) whose success almost entirely depends upon an audience checking its intelligence at the door, and instead surrendering to its potent mix of sweetness, silliness and sorrow.  It’s the kind of play that drives reviewers to churn out adjectives like “beautiful,” “lyrical,” “life affirming” and all that stuff that makes some people cry, but reduces intelligent critics to professional equivocators:  it’s not as bad as a two-and-a-half-hour dramedy featuring Puerto Ricans waling about marriage and commitment sounds, but it’s also not as good as the artists involved would like to think it is.

The first act begins in the sleepy town of Mia Flores, Puerto Rico, in the late 1950s, where we meet Flora, a headstrong young Puerto Rican woman for whom fidelity and commitment—especially from her philandering fiancé—means everything. After a funny scene that plays off the machismo-driven myth that Latin men can’t—and won’t—be faithful (“You can’t stop nature.  Do you ask a tiger not to stalk the antelope?” remarks Flora’s boyfriend), Flora breaks off her engagement and swears off love.  Until she meets Eusebio, who becomes the yin to her yang and (surprise, surprise) breaks through Flora’s tough exterior to win her heart as well as her hand in marriage. Like many other idealistic young Puerto Ricans at the time, or so we learn from Rivera’s play, they soon leave for America in search of a better life. Act two, which takes place almost four decades later, reveals that after nine children, bitter Long Island winters, a cancer scare for Flora and the loss of legs for Eusebio, their love has only grown stronger.

Act one is funny, feel-good, escapist entertainment, the kind of first-rate romantic-comedy writing that made me thankful I wasn’t diabetic lest I find myself in a sugar coma. It’s certainly a departure for this playwright, the writing here almost entirely bereft of the surface difficulty and gritty urban poetry that has distinguished his work from “Marisol” to “References to Salvador Dali Make Me Hot” to “Massacre: Sing to Your Children” (Rivera’s imaginative and powerful response to 9/11).  And if those previous efforts have reminded one of the works of Sam Shepard, Tony Kushner or Dylan Thomas, here the play’s empty charms are reminiscent of the films of Nora Ephron, the old-fashioned values-trumpeting plays of Neil Simon and the guilty-pleasure histrionics of a Hispanic telenovela.  I have no problem with this (it’s nice to see a serious writer let his hair down and attempt new things) and it would be disingenuous of me not to admit that I was easily entertained. My problem with the play—especially after the second act—is its dishonesty and seeming contradictions.  In the first act it seems to be saying something about an emancipated woman surviving—on her own terms—in a culturally-specific patriarchal world, but if she were to remain true to this anachronistic integrity in the second act, after a terrible second betrayal that threatens her faith in the opposite sex and in God, we should see her walk out that door faster than Ibsen’s Nora.  She can’t, of course, given the setup. And yet, it strikes me that when you really break it down, apart from Rivera’s cavalier attitude towards destructive infidelity (the way it’s handled here, you’d think its perpetrator had forgotten to take out the trash), the play seems to extol the kind of misguided, masochistic and self-deceptive thinking—about what you have to sacrifice in the name of love and companionship—that keeps people together far longer than they probably should be. It’s what the French might label, a romantic nostalgie de la boue.

Thankfully, even as the play becomes intellectually muddier and more shallow by the minute, the acting gets better and better, where it’s quite possible to recommend “Boleros” for the performances alone, as well as a coup de theatre involving a stunning staging surprise at the end of act one (and that only the Goodman could afford to lavish on a play in these troubled economic times) that is usually the province of big epic mega-musicals.  Speaking of commitment, this is exactly what director Henry Godinez extracts from his amazing cast, which includes memorable performances from the always smart and soulful Sandra Marquez, Elizabeth Ledo (who has the instantaneous likability factor of a young Didi Conn), Joe Minoso (an actor who somehow makes husky seem sexy) and Liza Fernandez (repeating her role—vocal quality and all— from “The Last Days of Judas Iscariot” yet effective nonetheless).  They devote themselves to each moment with full abandon (the only way to successfully tame a character in a Rivera play), and they are the source of the evening’s real merit and power (Fabrizio O. Almeida)