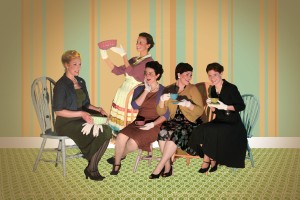 Tupperware may seem an odd choice of subject matter for a company of eager young theater artists, but the iconic storage product’s history holds a spirit of revolution that seems to ooze from The New Colony (TNC). And so comes “Tupperware: An American Musical Fable,” a new musical as the final show in a bold, often sold-out inaugural season for TNC.

Artistic director Andrew Hobgood and co-creators James Asmus and Julie Nichols have crafted a love letter to the power of female ingenuity. The story is that of a housewife daring to take big chances to lift up her family and herself. She does this in the faces of people telling her that women have a more traditional place. These women of “Tupperware” come from a very personal place for Hobgood.

“My dad’s mother was a classic military housewife. She stayed home and raised my dad and uncle while her husband flew off to the war,” shares Hobgood. “She came from a very traditional Southern family and went through all of the proper finishing schools. Many of the values that the housewives in Tupperware support are directly taken from the sorts of things I learned from her.”

“My other grandmother,” Hobgood explains of the inspiration for his protagonist, “was an interesting mix of supportive fifties wife with three kids and a progressive mind. She secretly was a Democrat and very much believed in women’s rights. She went to college and always held a job even though her friends and family couldn’t understand why.”

These matriarchs were TNC’s creative departure point. Working through structured improvisation and careful editing, the company has amassed a group of very funny performers who help give life to the ideas of the creators. Beyond the unique work in the rehearsal room, the company also takes ballsy chances on marketing and promotion, going so far as to post bad reviews on their Web site to generate their own public rebuttal. They embody a self-perpetuating excitement for theater and each other that makes it easy to believe they may change the way new plays are made.

Looking to explore Tupperware Parties and how modernity gave women tools to free themselves from the kitchens and washing machines, TNC has developed a musical that is ultimately about a rebellious spirit that chooses to play by new rules. Not a far departure from the company itself.