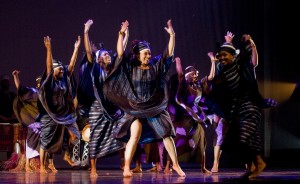 Muntu Dance Theatre is about origins, manifested in the carefully researched rhythms and dances from across Africa the group constructs and evident in the fierce pride with which founding member Babu Atiba speaks about the company. Appropriate then, that the next Muntu performance goes to the cradle of civilization for source material. Guest choreographer Abdel Salaam, artistic director of the New York-based Forces of Nature, portrays courtship rituals from Kemet, a region of ancient Egypt, in his new work “Bride from the South.” Just watching a three-inch-square, slightly fuzzy video clip from a rehearsal for “Bride” makes the pulse thud and the head bob. Atiba calls “…the Beginning” a family affair (that family being not only the African and African American clans, but the human one—the title of the company means “essence of humanity” in Bantu); it’s nearly impossible to stay in your seat during a Muntu performance—nor should you. Get out to the Harris this weekend and experience one of the most viscerally thrilling dance companies in the city. (Sharon Hoyer)