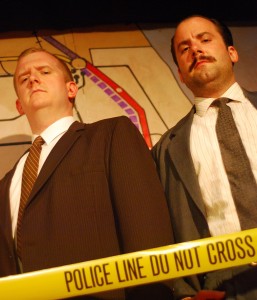 Manny Tamayo’s “Dead Wrong” is a murder mystery that is impossible to solve, because it simply doesn’t make sense. By the end, it is not only unclear why many people were killed, but also frequently impossible to know who killed who, which means that many of the clues the audience was given were either dead-ends or didn’t add up. The last scene attempts to tie up all the loose ends, but instead is confusing and hokey, with a corny plot twist that drew laughs from audience members and caused a person in the front row to exclaim “What?!” Part of the fun of murder-mystery plays is trying to figure out a puzzle but, in this case, it is impossible to know whether you got it right, because key questions are left unanswered. This is a shame, because the concept of the play is an interesting one. “Dead Wrong” follows two bumbling Chicago police officers as they attempt to solve a high-profile murder case, a premise with a great deal of comic potential and dramatic appeal, especially when performed in the city of Chicago. Unfortunately, the Factory Theater production does not give a convincing sense of setting because, even though the dialogue is chock full of allusions to Chicago streets and inside jokes, the characters seem to be closet New Yorkers, with many representing classic New York City stereotypes and some sporting faint New York accents. The lack of authenticity in this production was particularly lamentable considering the talent of certain cast members.  Eric Roach is a believable and likable cop as Mac and Anthony Tournis is over-the-top, but funny, in his role as Mac’s partner Chooch.  Brian Hinkle makes both a gritty and lovable Kid, and Anderson Lawfer is a standout in his role as the lonely and crazy Clarence. Dann Franke’s set design is also innovative, surrounding the audience and fitting several settings into a small space. Yet, in spite of these assets, the play is unsatisfying. What could have been an entertaining and original parody turned into a bad episode of “CSI,” with one cliché character and maudlin plot twist after another, and very little of the cleverness and irony that would have made the use of such tropes acceptable. (Ilana Kowarski)