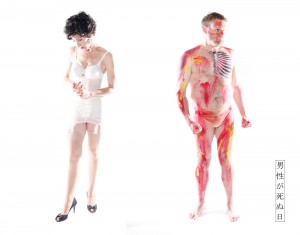 Director David Kaplan’s world premiere production of Tennessee Williams’ “The Day On Which a Man Dies” is back in Chicago.  Though the limited original run lived in Links Hall, this time the play is part of the Naked July festival at National Pastime Theatre.  If you saw the first go-round you know this play is something special. Subtitled “An Occidental Noh Play,” the work is a departure in form from what audiences may expect from Williams. Written at the height of his commercial fame, the play was one of the writer’s favorite projects and filters the story of the last day of a Jackson Pollock-like figure through the lens of Japanese Noh Theater.  The elegant and powerful Jennie Maroe as the Woman and the crazed Neanderthal of an artist Jeff Christian (new to this production), deliver meticulously crafted and blazingly honest performances that cry, “acting should be like this.”  The play runs only Friday and Saturday nights before it packs up and moves to the East Hamptons and then Kaplan’s Provincetown Tennessee Williams Festival.   (William Scott)