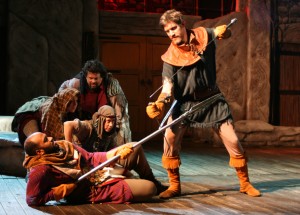 There is much to recommend in the First Folio production of “Macbeth”; the west suburban outdoor setting could not be more ideal for Shakespeare, cooperating with even a hint of mist to suggest the moors. The attention to detail, albeit taken literally and done up traditionally, does an effective job of transporting us back to the Elizabethan era, minus the occasional passing plane. There are no surprises like, say, Barbara Gaines’ contemporary and gruesome adaptation earlier this year at Chicago Shakespeare Theater. Indeed, if you crave a straight-ahead version of the Bard’s “Scottish” play, you’ll be right at home.

All that said, I found this to be a wanting experience on several levels. To begin with, key roles feel miscast, and with the exception of a sexual spark between Macbeth and Lady Macbeth, there is little chemistry among the ensemble. Nathan Hosner is so low-key as Macbeth that if you did not already know what is happening to him, you would have no idea of what the emotional impact of his ambitions and actions actually are. Patrice Egleston’s Lady Macbeth is restrained and scheming at the beginning of the play, which is quite refreshing at first and would make a glorious contrast to her later ungluing if that were ever unpacked, but it never is. Given that her implicit suicide is never dealt with directly in the staging and she remains so cool throughout the proceedings, she just mysteriously evaporates among the moors. E. B. Smith’s Macduff fails to reflect the rage of a man consumed with revenge after his entire family is wiped out, and in some bizarre and ineffectual cross-casting, Macduff’s slaughtered son is played by a female and the leader of the witches is a bearded, low-voiced male.

Perhaps the most ambitious aspect of the production is the action, hardly a surprise since director Nick Sandys is best known as a fight choreographer. The large onstage battles are fast, furious and well thought out, although some key cast members never quite get the hang of it, and sometimes blows and sword thrusts are pulled to the point of absurdity. But the real issue here, in say, the final climactic swordfight between Macbeth and Macduff, is that since neither they nor we make an emotional connection to either one or each other and despite some impressive stage combat, when all is said and done, the overall impact feels more like a night out at Medieval Times than experiencing one of the great dramas of Western civilization. (Dennis Polkow)