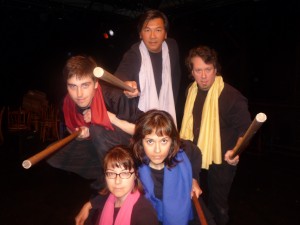 Chicago Improv Festival’s “Storybox” is a new kind of improv—the kind where each actor is both a storyteller and a role-player in a play which they spontaneously create themselves, along with seven other people who each have their own ideas about how the story should go. In a Mad-Lib type effort, eight people cooperate to tell a different story every performance—a story in which none of them have complete creative control, and where none knows for certain what will happen next. Together, they work—as a team—to produce a coherent, compelling narrative. It’s as if a person were trying to tell a story off-the-cuff at a campfire, and had a large group of friends to help them out. Unlike other improvisational shows, the focus here is not only on getting laughs, but is more about taking the audience on an emotional journey through the often serious dilemmas in the lives of characters portrayed. And, though more comedic moments would improve the quality of the Piven Theater production enormously, Storybox is still a fascinating experiment. And in order to make it work, Storybox creator Jonathan Pitts explains, it is necessary to have both a group mind and “a group heart,” a feat which is difficult to accomplish and fun to witness. At Sunday’s Storybox performance, there were a few slip-ups—a few cliché plot devices, an excess of melodrama and a few bloodthirsty narrators that killed off too many characters. But there were also fabulous characterizations. A very versatile actor, Jeremy Schaefer, in his leading role in the story that night, showed a remarkable ability to shift his emotional delivery and to convey his character’s pain when, with a few seconds notice, his character’s plight was changed from bad to worse. Kelly Williams’ dry delivery of her lines was effective at cutting down the sappiness of the more sugary scenes, and made her more believable than most in her many roles. Jonathan Pitts could be wonderfully funny, and lightened up the mood of the story when things got overly serious. Pitts is such a talented comedian that I wish he’d had more of a chance to showcase his talent for humor in the story they told that night, but he took full advantage of the moments he had to shine. Joe Yau’s natural tone made all of his characters seem honest, and his narrative choices were by far the most poignant and realistic. Using a minimalist set, these performers seem to create a world out of thin air—an imaginary world with vibrant characters that they bring to life themselves. For those of us interested in storytelling, watching someone create a story before our eyes can be quite an interesting and illuminating experience. (Ilana Kowarski)