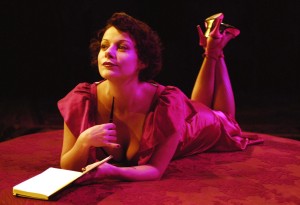 With the outbreak of infidelity that seems to be infesting American culture right now, from political indiscretions like those of the South Carolina governor, to pop-culture milestones like the split-up of Jon and Kate, one perspective seems to get left out more often than not—the perspective of the mistress. That all changes when Apple Tree Theatre mounts its first production in Chicago’s Loop, which is actually a remount of the North Shore theater’s 2007 Jeff-nominated “The Mistress Cycle,” this time on the stage of the historic Auditorium Theatre, for the first time transformed into an intimate black-box-style theater.

“Generationally we have different judgments about things,” explains director Kurt Johns of the differences in contemporary views of these women and that of a time like twelfth-century China. “The word ‘mistress’ always has this illicit sound of being bad or outside the norm, but these are powerful women finding love outside the lines and sacrificing to have that love in their lives.”

Johns speaks of these women affectionately. In a way they are old friends he has been living with since he became aware of the cycle in 2005. “I saw bits and pieces in New York and it just stayed in my belly,” Johns remembers of his first encounter with the work. The show went through several incarnations to find the right form and the right mistresses to inhabit it, but ultimately five were chosen. “What was really obvious as we started rehearsals is they [Giering and Blatt] really did end up with the right women,” Johns says.

“One of the subtitles of the show is ‘women who came in second,’” says Mark Weston, Apple Tree executive director. “It is not always an easy gig. We live in a time where Mark Sanford is live and in color in Argentina and he is not alone. In this show we see other political figures that took lovers; history hasn’t changed.”

These are not what Johns calls “fifty-fifty mistresses,” the lovers you spend half your time with when you aren’t with your family. These characters were chosen because of their full-throated, passionate stories of finding peace with their circumstances and accepting they will never be a priority in their lovers’ lives.

For Johns, one very important condition in getting “The Mistress Cycle” to the right place was to use as many women in the production as possible, ensuring a sense of honesty in these commanding female stories. The powerhouse ensemble is made up of some of Chicago’s most respected musical talent. They are Charissa Armon, Angela Ingersoll, Karen Marie Richardson, Susie McMonagle and Christine Bunuan (the only new member of the cast). Off-stage women wear the hats of music director, stage manager, set designer, costume designer and others. Laughing, Johns admits, “It is an estrogen rush to be in there.”

This time around the room Johns refers to may feel quite intimate, but in fact it will be quite expansive. The Auditorium Theatre of Roosevelt University is one of the larger performing-arts venues in the city, often hosting international dance companies and touring Broadway shows. For some time the theater has presented a cabaret series with singer and audiences both sharing the stage. For “The Mistress Cylce” the audience will once again sit on stage, but the space will be transformed into a legitimate 200-seat theater.

“We only have one huge theater. Most performing-arts centers have a big and small theater,” says the venue’s executive director Brett Batterson. “We have been looking for different ways to use the stage of the Auditorium. This show is perfect for what we wanted to do for our first venture into this stage-on-stage theater idea.”

This non-traditional musical may be the perfect fit for this non-traditional use of space. With luck the Auditorium will find a formula that opens up future possibilities and Apple Tree will revive a timely work it feels deserves a second, notable life.