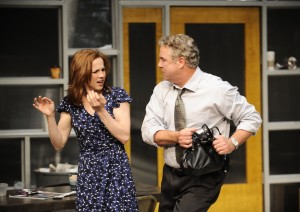 At what point does a child’s mind become adult, not necessarily in a carnal way, but in a more abstract sense, roughly defined as having “adult emotions” and the ability to make “adult decisions”? The truth is that no one knows, but society takes a definitive stance on the issue nonetheless. You have to be 16 to drive a car, 18 to die in a war or to vote, 21 to drink a beer. But when are you old enough to know real love, or to have sex? On this question, even the states can’t quite agree. It’s 17 in Illinois, but over in Indiana, apparently, the young mature faster: 16 out of wedlock, but tie the knot and you can do the whoopie at 14. At least we can all agree that sex with a 12-year-old is wrong, right? But what to make of the likes of Mary Kay Letourneau, the school teacher who was impregnated by her 13-year-old student and now, a decade and a jail sentence later, is married to him, with two children?

Such musings are inevitable after taking in David Harrower’s “Blackbird,” which beat out the likes of Tom Stoppard’s “Rock ‘n’ Roll” and Peter Morgan’s “Frost/Nixon” for the prestigious 2007 Laurence Olivier Award—Britain’s equivalent of the Tony—and is now having its Chicago premiere at Victory Gardens. Add William Peterson in only his second role since abdicating the “CSI” throne in favor of Chicago theater last year, and you have perhaps this summer’s most widely anticipated production which, thankfully, exceeds expectations, with a tightly rendered and tightly wound staging helmed by Victory Gardens’ artistic director Dennis Zacek.

The story of a fifteen-years-later confrontation between Ray and Una, who’d had a sexual relationship when he was 40 and she was 12—set in Dean Taucher’s spot-on creation of an office lunchroom that’s clearly outlived its prime—takes place in a gripping ninety or so minutes that brings to mind a jack-in-the-box: the handle cranks tighter and tighter, while we just wait for one of the characters to pop.

After serving his time in prison, Ray’s exiled himself. He’s built a wall, crafted a new life and knows he should protect it—”I don’t have to talk to you” he tells Una (and himself)—but he cannot hold back. Una’s found him, in one of those countless anonymous low-slung buildings clustering in office parks where, as she observes, no one knows what goes on inside. Peterson not only nails the complex speech patterns crafted by Harrower, poetically conjuring Mamet at first when the discomfort of the confrontation leaves both characters striving for syntax, but his facial expressions alone are a canvas of dialogue that need not be spoken.

Mattie Hawkinson’s Una is a daunting challenge, both in role and casting. Peterson’s stage legend and current celebrity looms large in this two-hander; she more than holds up and makes this a play of equals, walking a fine line of performance. She’s always vulnerable, on the very edge of disintegration, but never pathetic. As Ray says, she’s strong. The whole enterprise hinges on Una being a fragile flower, though not fully crushed, with the lingering perfume of attraction. You want to hug her and to have her.

In creating such ambiguity of victimization, Harrower’s play challenges conventional morality without caution, leaving the broader social agenda to placards in the lobby. This one is personal. As Nabokov wrote in the the second line of “Lolita”: “My sin, my soul.” That is the question. (Brian Hieggelke)

A twelve year old is no match for a 40 year old..Please.

When I was that age I was “in love” with a man in his middle thirties..It was a crush…I didn’t know SQUAT and, had he had the chance, he could have taken advantage of me with abandon.

I completely reject the idea that there can be any “healthy” sexual love between a pre-pubescent and a middle aged man.

As far as the review above (yes, I saw the play)..The middle aged man judged the female lead as “strong”..when she was TWELVE….A ridiculous assertion by a middle aged pedophile trying to justify sex with a twelve year old virgin.

One of the problems of covering stage and music is that sometimes one gets in the way of the other and I ended up having to give up reviewing the opening night of “Blackbird” for a Susan Graham recital. At Newcity, however, we have a publisher who so loves stage for its own sake that he was already going anyway, and graciously offered to step in. I can’t think of another publication here or anywhere else where that could happen, and could happen so well that the review is at least if not more interesting that what the “regular” critics… Read more »