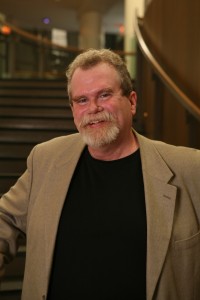 In another life, Steve Scott might have directed high school musicals. The prolific Chicago director actually got his start in the classroom—teaching high school and then college in his home state of Kansas. “I originally taught at a small religious university,” he says with a laugh. “Let’s just say I didn’t fit in terribly well.”

That life is a far cry from Scott’s current career as a sought-after freelance director and associate producer of The Goodman Theatre (a job he’s held for twenty-two years). But it wasn’t the straight-and-narrow path that led Scott to his current post. “I never had a system,” he says, “I never had a plan for the next ten years.” In fact, the reputable Scott has no formal directing training—whatever that may say about the necessity of pricey MFA training programs. The origin of Scott’s career stems from directing one-acts in grad school (“They asked me to help because everyone else was busy,” he says) and later from running a summer-stock company in Kansas.

After skipping out of Kansas and heading for the big city, Scott landed a job as The Goodman Theatre’s Director of Education, due to his extensive teaching background. Around that same time, he started directing at small theaters around town. “I would do a production that was reasonably good, so another theater would call me up,” Scott says with a shrug. It was a slow burn, but the consistent high quality of Scott’s work eventually earned him the most valuable currency in the theater community: a good reputation. Seven years later, after a stint as a teacher at The Latin School of Chicago, newly crowned Goodman Artistic Director Robert Falls brought on Scott as his right-hand man. “Bob didn’t want to be burdened with administrative work,” the persistently jolly Scott says without a trace of resentment. “He is impatient with details.”

Despite The Goodman’s creative product, Scott admits his job is mostly administrative. “A company is a company,” he says. “It can sometimes feel the same as working at Aon or Sears.” Which is why Scott balances his day job with freelance directing gigs, the result of which is both artistic fulfillment and financial stability—not to mention an intensely busy schedule.

His latest project, John Guare’s “Six Degrees of Separation,” opens this week at The Greenhouse Theatre in Lincoln Park. The play is produced by Eclipse Theatre, a 16-year-old company that delves into the work of one playwright per season. In addition to being a company member at Eclipse and The Goodman, Scott is also a member of About Face Theatre and Collaboraction.

The juggle, however, isn’t always easy. Scott, who is now closing in on 60, holds down a schedule that would undoubtedly daunt young professionals half his age: his position at The Goodman demands the usual 9am-5pm commitment, but when he’s rehearsing a play (which happens at least four times per year) he jets over to rehearsal in another part of the city from 7pm-11pm five nights a week. He also teaches a class at Roosevelt University on his lunch break twice a week, and a class at Act One Studios. “Nurturing young artists reminds me of why I do this in the first place,” Scott says of his teaching. Besides, he is still a high-school teacher by trade.

But Scott’s artistically packed life does come with its tradeoffs. “I don’t have a family,” Scott says matter-of-factly. “With my schedule I can’t even have a pet, much less a child.” So whenever young artists come to him with grievances about managing family life on top of a directing/acting career, Scott simply wishes them luck and sends them on their way.

When asked what is next on his docket, Scott does a belly laugh and rubs his hands on his forehead, as if trying to remember the various projects to which he’s committed. Next up after the Eclipse show closes is a new play at Silk Road Theatre Project (a company that showcases the work of Asian, Middle Eastern and Mediterranean artists) and a gig at the tiny Redtwist Theatre (proving definitively that Scott doesn’t fancy himself too good for the minor leagues). After that, it’s onto a musical up at Northlight Theatre in Skokie. “You know musicals, in particular ‘West Side Story,’ were the thing that sparked my love for theater,” he confesses. “I always pictured myself as a Shark.”

It is perhaps this refusal to be pigeonholed that makes the amorphous Scott so unique. The sheer variety of his directing record is something of a wonder, and his deep relationships with different theaters around town speaks to a certain degree of elasticity. “I suppose a moving target is hard to typecast,” says Scott of his indefinable style. And by the look of it, he’s grateful for this flexibility—something he might not have had if he’d stuck around that small college in Kansas thirty years ago.