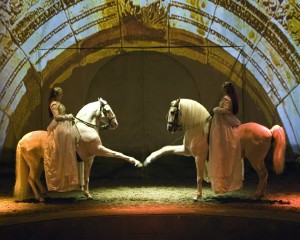 It’s ironic that Normand Latourelle, the man behind “Cavalia,” a big-top spectacle boasting an international mix of glorious horse breeds, was also one of the driving forces, around the mid-1980s, behind “Cirque du Soleil.”  Ironic since it was this nouveau-circus-outfit-turned-global-franchise-blockbuster, easily Canada’s most successful entertainment export of all time (sorry, Celine), that helped audiences of all ages all but forget that the “Greatest Show on Earth”— as the formative circus of my childhood, Ringling Bros. & Barnum & Bailey, used to be known—at one time featured a wild kingdom of sorts (elephants, lions, tigers and llamas) for audiences to gawk at.  With “Cavalia” the animal element has been (thankfully) reintroduced into the ring, but not in any way that would have animal-rights’ groups picketing outside the 100-foot tall and 26,000-square-foot wide touring tent that has been pitched at Racine and Jackson for “Cavalia”’s Chicago engagement.  Given the complete lack of “equestrian entertainments”—I don’t know about you but the last time I saw a horse successfully execute a battement tendu it was for choreographer Twyla Tharp in the movie “Hair”—this expensively produced and exotic entertainment juggernaut featuring horses certainly fills a niche.  But although it’s always entertaining, at two-and-a-half-hours running time, the show as a whole is slightly less than exhilarating.  And while its creators have guaranteed a unique evening out—for a hefty price, it must be said, although at least one can see where the money has gone—they haven’t molded it into something that is as yet uniquely special.

Like “Cirque du Soleil” “Cavalia” is structured as a series of individual circus turns based upon a theme, “Cavalia”’s being the exploration of the bond between humans and horses.  That’s abstract, of course, but so are two of the show’s most impressive design elements.  First there’s composer Michel Cusson’s chameleon-like score and soundscapes (performed live): guitar-heavy Spanish Flamenco; cello-driven Classical; climax-evoking power ballads a la James Horner.  And then there’s Érick Villeneuve’s visual concept for the show, evoking an ethereal feel with the use of high-tech kaleidoscopic lighting and colors, larger-than-life projections, graffiti-decorated murals of horses and equestrian-inspired expressionistic images that could have been sketched by Jean-Michel Basquiat were he alive today.  Conveying ever-shifting moods instead of concrete ideas, they are the equivalent of an aural and visual Rorschach test and form the backdrop to a mumbo jumbo of moments featuring humans and horses.  It’s when the human element alone dominates that the show can become monotonous.  And indeed, there are times when “Cavalia” is in danger of being little more than just another “Cirque” installment, especially when the horses are jockeying for the spotlight against aerial ballet, bungee jumping, pole climbing and acrobatics.  Of course, it’s when a human is perched on the back of a galloping horse without a safety harness, performing death-defying flips and leaps while the horse is gliding along at breakneck speeds, that “Cavalia” soars.  Personally, the quieter and more poetic moments of the show—where I pondered the degree of technical difficulty that must be involved in getting twelve horses to line up in a staggered line, to rotate on cue, to curtsy like prima ballerinas—are the ones that cast their strongest spell. Ultimately, there’s horse aplenty for the horse lover here: the show features some sixty horses representing thirteen different breeds from around the globe.  However, it just feels like the human feats overpower those of their four-legged friends, with the heart of the show—the intimate relationship between animal and human that is “Cavalia”’s raison d’etre and that harks back to the old-fashioned circus—lost amidst a high-tech feast of fools.

This heady mix of the contemplative and climactic—the show ends with a finale that is pure sensory overload—could have been accomplished with a tighter, cleaner and more streamlined show.  As it stands now it feels like a strong first draft of a show—entertaining but stylistically messy, poised somewhere between sloppy and slick yet content to take its time.  Perhaps that old adage, you can’t rush a Frenchman, is equally true of their French-Canadian cousins.  It may also explain why “Cavalia” might end up being more successful in Europe than in America.  After all, Americans are plagued with short-attention spans and that jaded “is that all there is?” mentality, one that could easily overwhelm the pure enjoyment of seeing something new and nascent.  If Latourelle et al hope to make this another entertainment franchise a la “Cirque du Soleil” they may want to consider tightening their creative reigns.  Otherwise, “Cavalia” could be in danger of being a one-trick pony. (Fabrizio O. Almeida)