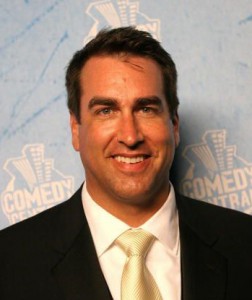 Most will recognize Rob Riggle as “that one guy from The Daily Show, ” the husky correspondent who showed up around the same time as John Oliver. But Riggle’s been all over the biz, the kind of guy  you start to notice after he’s popped up in humorous sketches over and over again, like on “Late Night with Conan O’Brien,” “Saturday Night Live,” “The Upright Citizen’s Brigade” and most recently in the bro-comedy smash hit “The Hangover.” But the most intriguing entry on Riggle’s resume? The U.S. Marine Corps Reserves. Amidst tours in Liberia, Kosovo and Afghanistan, Riggle managed to squeeze in time to foster a comedy career, becoming one of the few (if any) comedians whose day job is lieutenant colonel. Riggle’s not especially known for his stand-up routine, but his work on “The Daily Show” and other sketch troupes suggests a blend of political humor and a lot of off-the-cuff jabs. Between the military experience and the dirt he surely has on Jon Stewart, he probably has a thing or two to chat about. (Andy Seifert)