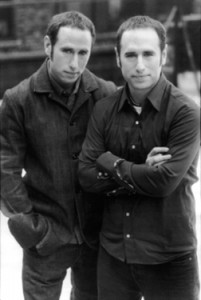 Two is better than one, right? It seems like Randy and Jason Sklar understand this, because they’ve constructed a comedy routine that–like the old Abbott and Costello routines of the thirties–refuses to pause, one that uses their power in numbers to create a breathless, never-ending assault of dialogue. The St. Louis-born comedy duo are not just brothers, they’re also identical twins, a sight that lends itself remarkably well to the stage (it’ll also make you realize just how lucky we are Andrew Dice Clay never had a twin). As opposed to other comedy duos that featuring contrasting personas, the Sklar brothers are virtually the same, both in personality and appearance. Both come across as witty, intelligent and pop-culture savvy, but it’s their performance style that has carved a niche apart from other duos: where one stops, the other begins; when one asks a question, the other answers. Their indistinguishable voices create the sensation that you’re not watching two comedians work together; you’re witnessing some multi-voiced super-human comedian. (Andy Seifert)