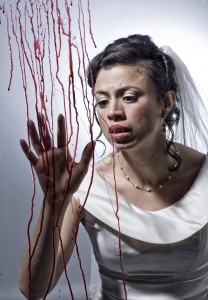 You know you’re completely uninvolved in a performance when a cell phone goes off for the second time, you’re not bothered one bit and you actually find yourself trying to identify its musical ringtone.  Such was my experience at the opening night of “El Grito del Bronx, ” a play whose fierce title proved to be the most stirring thing of the evening.  Literally translated, it means “A Cry from the Bronx,” but I prefer “Bronx Scream” since the poetry is more in line with playwright Midgalia Cruz’s highly visceral and at times unrealistic writing style.

As the press release for this Teatro Vista/Collaboraction/Goodman production trumpets, “El Grito” is a “powerful new work exploring the recurring cycle of violence, the universality of suffering and the power of the human spirit to soar again.”  This describes the themes upon which the play touches, although it also comments on the plight of death-row inmates, machismo, homophobia and forgiveness—none of which are explored to any satisfaction.  The action gives us patricide—Puerto Rican style—when a 14 year-old teenager in the Bronx bludgeons his abusive Latin father to death with a hammer, a man who has been physically and emotionally abusive towards his 12-year-old daughter and the family’s mother.  It’s a story that’s been told a thousand times before, replete with the same Latin stereotypes, but probably not as colorfully as it has been here given Ms. Cruz’s acute language, poeticized moments, song fragments and tonal shifts between different time periods and places.  As someone who spent five years reading plays in a literary office, I can see that this must have read great on the page.  On the stage it’s a different story:  adult versions of damaged children have trouble maintaining romantic relationships; characters howl with cries of grief; mothers reminisce about the good in their serial-killer sons and sing lullabies; and the ghost of a violent patriarch never seems to leave the room.  If this all sounds like the product of a touchy-feely creative-writing therapy assignment, it comes across even worse in performance, with a staging by director Anthony Moseley that matches and sometimes surpasses the writing in its pretentiousness:  harsh lighting; actors speaking their lines in musical canon; projections that soak the set in a blood-red coloring more apropos for the histrionics of an opera; overly literal staging.  He isn’t helped by Regina Garcia’s uninteresting set, a two-level playing area that fills the height of the Owen but never achieves any depth.  And it’s been so badly lit by Jeremy Getz that many times I didn’t know where to focus my eye on a scene.  Sandra Delgado, a beautiful and appealing actress, can’t count on her instant likability factor to help sympathetically portray a character who—either as written or performed—spends most of time whining and alienating everyone around her, including the audience.  Sadly, the rest of the cast work equally as hard and achieve as little.

In a program note the playwright has stated that “El Grito del Bronx” began as a “thought” about a personal family member.  How much of the actual play is autobiographical is unknown, however, it comes across as one of those deeply personal works that the playwright clearly needed to express.  Whether this theatrical cri de coeur deserved to be heard is another matter entirely. (Fabrizio O. Almeida)