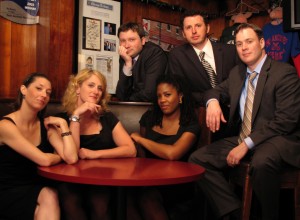 Second City revues rarely diverge from format.  The rhythms are bright and confident, and comedic actors with darker, more unusual inclinations typically have a steeper learning curve adjusting to the form while retaining some bite.

For audiences, the setup provides a baseline consistency.  It has also served many a Second City alumus very, very well—banging out the same show every night, they leave here with TV-ready experience and polish.

Ultimately, the quality of any revue is contingent on how well its writer-performers mesh—their comedic philosophy, their personalities—and the cast occupying the Second City’s e.t.c. stage is among the best in recent years.  The same cannot be said of their current show, directed by Matt Hovde.

“Studs Terkel’s Not Working,” as the title suggests, has a definitive Chicago focus, which I liked.  Kevin Depinet and Amy Jackson’s warehouse set design is one of the more fully realized concepts to grace the stage in years, looking like one of those red brick factory spaces on Ravenswood.  Aesthetically, it is a major step up from previous designs that frequently amounted to blank walls and random doorways.

The show opens with a song rooting the proceedings in Chicago with a specificity that I think won’t alienate tourist audiences.  That’s not an easy thing to do.  The show feels like it belongs in—and to—Chicago, and that’s as it should be.  This is a frequently amusing, occasionally funny revue with one legitimately hilarious Blagojevich joke that isn’t terribly original but extremely canny in its execution.

Every show has its star—the actor who has a significant influence on the show’s style and content—and this time out it appears to be Tom Flanigan.  He is not a flashy performer, so low-key he almost blends into the scenery—but there’s something there.  He has the face of Dennis the Menace, but with subtle shifts he can conjure a banal Jeffrey Dahmer creepiness.

In a scene featuring Flanigan and Amanda Blake Davis (who has let up on the gas just enough over the years to find her comedic sweet spot), they play Ma and Pa Kettle types up in Iowa, trying to parse how it came to be that Iowa allows gay marriage but California does not.  “Iowa, America,” says Flanigan.  “Just want to clarify that.”  He gives a tip of his hat and it’s a small detail, but there is a tidy amount of character comedy found within that moment.  Flanigan also takes the stage solo to sing about a pretty girl, astrology and a “faulty logic hymen.”  The song is simple but effective.

The newest cast member is Beth Melewski, a blonde with screwball energy that works very well on stage: “Chloroform is the sweet nectar of love,” is one of her better lines.  She’s a good addition.  Christina Anthony, who joined the cast last year, continues to be an assured performer though I’d like to see her do more character work.

Despite all that the show has going for it, it comes up short, I think, because it doesn’t play to the strengths of cast members Timothy Edward Mason and Andy St. Clair.  Too often they are both relegated to supporting player status.  Don’t get me wrong, Mason is an expert straight man, never boring—but both he and St. Clair have distinctive talents that aren’t utilized to their fullest herein.

Mason has a weird side, and it’s accessible because his outward appearance suggests something close to normality; the show doesn’t really showcase this slice of his persona.  As for St. Clair, at heart he is a performative raconteur.  He can build a character very quickly and doesn’t need anyone else on stage to do it.  Again, that’s missing this time out.

Invariably, there are bits that don’t land, notably a sketch about “wiggers”—white people who act black—but two sketches in particular stand out.  One is essentially the “Groundhog Day” of casting sessions—it had a nice surrealist bent to it.

The other is an improv scene involving an audience member who is asked to portray a private eye, and sent off traipsing through the theater at the behest of Mason, who sits at a non-existent typewriter, conjuring a noir.  Mason has a nice way of finessing things—he is the de facto director of this bit—and if a semi-reluctant audience member is roped into the act, all the better.

The sketch shouldn’t work as well as it does—it could easily slide into something that feels like a murder-mystery game—but it’s a gambit that pays off considerably.  If only the rest of the show were this strong.  (Nina Metz)