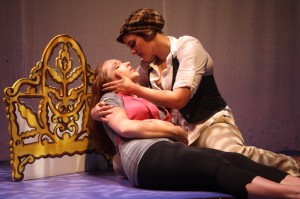 Bailiwick’s ‘Cousins Grimm” begins with the song “Why not a Fairytale?” and by the end of Scott Ferguson’s world-premiere production, the audience feels like singing along.  A musical about playwrights creating a gay, musical version of the Grimm’s fairytales may sound ridiculous—and it is—but it is also fabulous.  Shamelessly campy, Bailiwick’s “The Cousins Grimm” is jam-packed with laughs—so much so that one audience member said that her mouth hurt from smiling.  In between the witty jokes, the crazy costumes and the larger-than-life characters, viewers catch a glimpse of themselves in stories about struggling against losing hope and losing love.  They can also see some great performers. Consistently hilarious and with excellent comedic timing in his many roles, Chad is very skilled at cycling between parts, even when that means alternating from a human voice to an animal voice and back.  As a duck, as a frog, and in his lead role as Leon the bitter and frustrated playwright, he’s a delight.  His leading lady Danni Smith sings beautifully, and does a nice job playing the hopeless romantic as Jackie Grimm. Rebecca Hamlin’s set design is outstanding, mixing classical designs and modern technology in a very innovative way, including a well-integrated (and often hidden) projector screen which proves very important for many of the most interesting and entertaining moments in the play.  Lisa Morrill’s costumes perfectly give each of the characters some pizazz. Ted Sod’s script and Mark Biello’s lyrics are both amusing and poignant, and even the most biting and edgy moments in the script have a lot of heart.  “The Cousins Grimm” is a lovely combination of satire and romance, and manages to let the audience laugh at fairytales without forgetting their charm. (Ilana Kowarski)