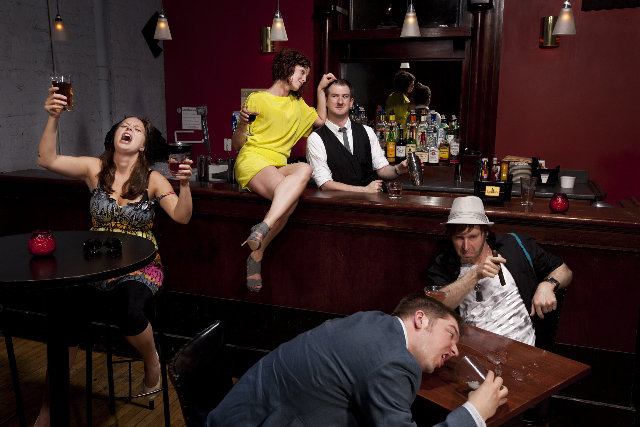 Pub Theater Company moves to a new space with a beer garden just in time to open a third year of “Bye Bye Liver: the Chicago Drinking Play” on July 24th.  At the new Pub Theater at Fizz, 3320 N. Lincoln, company president Byron Hatfield promises, “You will have a very funny time and cheap drinks.”  The company’s formula is pretty basic, Hatfield says, if you give people laughs and liquor, “You pretty much can’t fail.”

After two successful runs of Bye Bye Liver, Pub Theater began attracting crowds that were too big for its space at the Chicago Center for the Performing Arts, and started looking for its own space in Lakeview, where many of the company members and audience members lived. Because of Lakeview’s “collegiate atmosphere,” Hatfield believes it is the perfect spot for sketch comedy about college life. Hatfield says the space itself has other attractions, as well.  By having “a classy theater upstairs and a party downstairs,” Hatfield says Pub Theater at Fizz allows its audiences to have both without “confusing the two.”

Hatfield marvels at the fact that his young theater company can afford its own theater. Hatfield and fellow founders Joshua Dunkin and Mike Barton originally met in college, where they developed their own brand of sketch comedy without knowing about groups like Second City. “We were idiots. We thought we invented sketch in college because we were doing plays and decided to keep making them shorter and funnier. Of course, then we discovered that Chicago pretty well had that market cornered,” Hatfield laughs.  Inspired by his college experiences and script-first approach to sketch, Hatfield came up with the concept for “Bye Bye Liver” in 2006, teamed up with Dunkin and Barton, and formed The Pub Theater to produce other works.