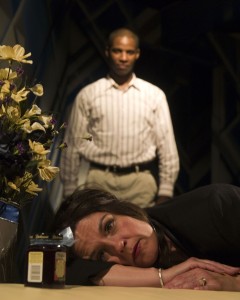 By now, the real-life events that provoked John Guare’s “Six Degrees of Separation” are as famous as the play itself.  How a young African-American man in the 1980s maneuvered his way into the homes of New York’s upper crust and bamboozled the likes of Calvin Klein under the false pretenses that he was actor Sidney Poitier’s son.  How the playwright got slapped with a $60 million lawsuit by said African-American imposter claiming that his life had been plagiarized for the show’s hit Off-Broadway run in 1990.  And how he famously picketed the play’s London premiere two years later and had to be removed by the British police.  Poor guy, he probably should have bothered to see the play.

“Six Degrees of Separation,” now in an entertaining but unmoving revival courtesy of Eclipse, isn’t really “about” Paul, as Guare has christened the young African-American conman for his play.  Yes, Paul arrives at the doorstep of moneyed Manhattanites—here, an ambitious art dealer and his socialite wife Ouisa—under the false pretenses that he is Sidney Poitier’s son, has been violently mugged and is a classmate of the couple’s kids at Harvard.  But any similarities to real life end there.  During the ninety minutes that follow, Guare turns Paul not into a character but into a catalyst by which everyone else entertains questions of race, class, money and morals.  Guare, a raw absurdist in his early playwriting years but a flashy intellectual by the time he wrote “Six Degrees” (but thankfully not as pompous as he became with “Four Baboons Adoring the Sun” which followed), shows shades of both playwrights here, playing around with time and structure, dazzling with his intellectual veracity (one “verbal aria” effortlessly deconstructs Salinger, draws literary references to Chekhov and Beckett and references European attitudes to blacks) yet occasionally wallowing in the waters of low-brow sitcom dialogue, especially in scenes involving affluent Manhattan children.  Clearly there’s a lot of seductive surface glitz here, but the key to the play’s emotional heart is two-fold, and Eclipse’s production boasts at least one in the actor playing Paul.

The character of Paul must seduce not just his would-be victims but also the audience, and actor Michael Pogue, with a voice so rich and sweet you could almost spread it like jam, is a mesmerizing raconteur who manages to be charming yet not obsequious.  Pogue’s complex portrayal of an underwritten character drives home one of the play’s strongest ideas: how Paul’s rich imagination and vivid life force is ironically wasted on the kind of people for whom money can obviously buy everything except meaningful human connections and experiences.  And so we want to save him, we want to help him break through that falsity that is the affluent materialistic world, and we need to believe that when Ouisa steps up to the challenge that she is doing so not just because she wants to, but because she needs to, because she has realized that Paul is no different from her and his swindling is no better than her shallow class aspirations.  These shifts are in the play but on opening night they were missing from actress Karen Yates’ emotional arc as Ouisa.  Yates has nailed the affluent, affected, spellbound, cold and confused charm of a woman who is dazzled and then duped. But a palpable despair and vulnerability eludes Ms. Yates’ performance, and her final moments are psychologically bereft of the crucial idea that she must save Paul at all costs in order to save herself.  As such, there’s an emotional hole at the center of this revival.

Certainly issues of race and class, as epitomized this past week with the controversial debacle involving an African-American Harvard professor and Caucasian policemen, are always trenchant.  And along with the current zeitgeist that sees resentment towards the rich, as well as the ethical questions surrounding million-dollar bonuses for the haves when the have-nots can’t afford basic health insurance, ensures that Eclipse’s revival will benefit from a rich topicality.  But the emotional devastation of which “Six Degrees of Separation” is capable, and that I felt nineteen years ago after seeing the original Off-Broadway production in a performance that remains seared in the heart and head,  is missing from director Steve Scott’s otherwise respectable revival. (Fabrizio O. Almeida)