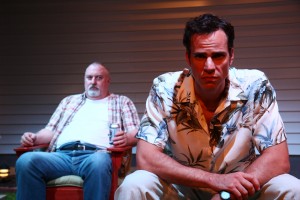 Without even knowing the rest of playwright Brett Neveu’s canon—something I’m loathe to admit given how cherished this homegrown Chicago playwright is—I see “The Last Barbecue, ” first presented in Chicago nine years ago under the direction of Ann Filmer and currently being revived by 16th Street Theater in Berwyn (with Filmer once again at the helm), as something of an exercise and experiment, a play whose ultimate value may have been more beneficial to an up-and-coming playwright than to—dare I say—his audience, especially nine years later.

At its basic, this eighty-minute chamber piece centers around a family (mother, father, son, wife and old girlfriend) and their interactions at a barbecue that never starts and around a reunion that we never actually see. As in Chekhov, the characters don’t necessarily speak with each other as much as they talk to and past one another.  As with Beckett, characters are referenced but never appear, and activities are prepped (a croquet match) but never begin. And when someone—anyone—finally does appear, like the messenger from Ionesco’s “The Chairs,” the “message” doesn’t offer the hope or salvation everyone—including the audience—thought it might.  But the strongest comparisons the play will evoke will be to Pinter (by the critics) and Mamet (by the public).  Indeed, at this point in his development Neveu was clearly fascinated with both extremes afforded by language, and as such “Barbecue” boasts pockets of dialogue that stimulate the ear with their curious and offbeat rhythms, as well as long patches of silence that verge on the uncomfortable, if only because Filmer and her talented cast are so adept at conveying the pain that permeates most of these silences.  At its heart, the play is an existential nightmare that could be set in any cookie-cutter American suburban backyard.  A father (a devastating turn by Donald Blair) prepares for a barbecue as if preparing for his execution, the life force having been drained out of him years ago.  A mother scurries around and gets on everyone’s nerves, trying to feign indifference towards a husband who clearly stopped paying attention to her years ago.  In an affecting performance from Ann James, here employing an irritating voice that could shatter glass, she’s reminiscent of the great Jean Stapleton playing that loveable “dingbat” Edith Bunker on the seminal seventies sitcom “All in the Family,” but here infusing her character’s naiveté with glints of self-awareness that convey a survivor’s strength. None of the remaining characters are as powerfully complex as these two, but they serve their purpose in representing Neveu’s dark point of view that they will not do any better than their parents, nor will they actually be able to effectuate their dreams amidst their dreary existence.  As if to drive that point home, a character who clearly “escaped” to the big city of New York has returned for the reunion, yet only succeeds in wreaking havoc upon the emotions of her contemporaries while sending the others down bitter memory lane.  But this character never convinces us that the big city has permeated her heart, and ultimately she is just as lost and doomed as the inhabitants of her old small town.  For the rest of the play, characters deliver monologues about failed hopes and aspirations, the foolish young don’t realize the mirror images they are seeing of themselves when they are quick to dismiss their jaded elders, and the pathetic existence of all these characters is funny in an absurdist kind of way.

There’s a fine line between a play that’s a downer and one that’s simply dull, and “The Last Barbecue” dangerously comes close to being the latter. Certainly the performances aren’t, and Filmer’s direction here is as taut and restrained as I have ever seen, ensuring that her actors’ bare emotions and the playwright’s words take center stage throughout.  It’s the kind of direction that I admire since it’s the kind of work that you don’t notice because everything seems so perfectly natural and unforced.  Unfortunately, it’s the material here that ultimately lacks warmth.  After all, since few audience members are likely to have Chekhov, Ionesco, Beckett and Pinter floating around through their heads to help build some kind of intellectual resonance with this difficult and at times depressing material, an emotional connection may be an even harder thing to expect.

If the play says anything, it seems to be about the dangers of being stuck in the past, as well as the futility of trying to recreate positive memories from long ago.  It seems ironic that the creative team behind the original production of “The Last Barbecue”—some of whom have reassembled here for this otherwise perfectly respectable Berwyn remount—may be culpable of the same thing. (Fabrizio O. Almeida)