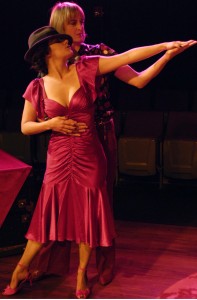 It’s fitting that “The Mistress Cycle” takes the point-of-view of “the other woman,” a perspective usually overlooked in most romantic narratives, since it’s the first theatrical production watched from the stage of the spectacular Auditorium Theatre, and that’s an equally unusual vista. Set in a “black-box” seating a mere 200, it’s awe-inspiring to gaze out on the nearly 4,000 empty seats, and to take in Adler & Sullivan’s glorious space from a vantage usually reserved for performers. The show itself, the restaging of a 2007 production by suburban Apple Tree Theatre, is a pleasant if somewhat unchallenging night of music executed in its highest form. Crafted as a one-act song cycle, rather than a dramatically staged musical, Jenny Giering (music) and Beth Blatt (lyrics) are onto something reasonably fresh and economical here, with five actors gliding around a small performance space transformed into a cabaret-style nightclub and singing their stories. Some strange juxtapositions lurk below the surface, though. The recurring throughline of characters who “love outside the lines” without apology, with its strong feminist currents, gets undermined by such constructions as having the eroticist and serial lover Anais Nin (played with vixenish vigor by Angela Ingersoll in the standout performance amongst a sturdy cast) take center stage with the song “Papa,” which blames the unconventionality of her life, so unabashed in its writings, on the bathetic notion that she was just working out daddy issues. The other standout performance, Susie McMonagle as courtesan-to-a-king Diane de Poitiers in the most fully fleshed-out narative, ends tragically with her young lover’s premature death. Bitterwseet as this subject surely should be, you need not worry: this is a musical, so it will wrap up with an upbeat song whether it deserves it or not. Nevertheless, director Kurt Johns moves the whole thing along so smoothly that you’ll forget you’re sitting in this spectacular mammoth cave, and get lost in the souls on stage. (Brian Hieggelke)