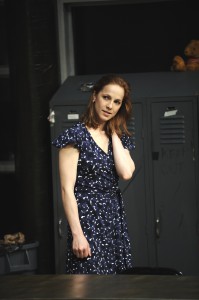 Here’s how Mattie Hawkinson’s spending her summer in Chicago: babysitting for her friends, playing with their dogs, showing her extended family around the sites of Chicago—”I’ve been to the Art Institute so many times I almost bought a membership”—going for ice cream, taking walks in the park. “Anything innocent,” she says. Kind of a mother’s dream, when your twentysomething daughter’s living thousands of miles away in the big city.

Except that every day at 7:30pm, she steps onto the stage at the Biograph Theatre and steps into the role of Una, the victim of a pedophile more than a decade earlier when she was twelve. And that pedophile, who she spends the next ninety or so minutes locked into a confrontation with, is played by none other than Chicago theater’s reigning leading man, William Petersen, who famously deserted top billing in television’s top show, “CSI,” so that he could return to the town of his formative years, and play roles like that of the onetime child molester in David Harrower’s harrowing drama, “Blackbird.” Innocent daytime pursuits for Hawkinson are not youthful frivolity, but rather a necessary counterbalance to the darkly damaged soul she inhabits each night.

Going head-to-head in a two-person show with the likes of Petersen is both an extraordinary opportunity and a formidable challenge for a young actress. Hawkinson’s undaunted by the whole thing, singing the praises of the hard-working, down-to-earth Petersen (“not a diva in any way”) as well as noting her comfort level working at Victory Gardens, where this is her fourth show. “I’ve worked with the director, I know the audience,” she says. Her backstage calm is the antithesis of her onstage intensity, where she dials it up to ten and never turns it down. Her portrayal of Una is powerful and nuanced, and has earned her a consensus of reviews that would send most actors straight to Cloud Nine (“a career-making performance” says Chris Jones in the Tribune, for example). Instead, Hawkinson credits the playwright and her director. It’s “like playing chess,” she says. “We [follow the script] move by move. It makes us look like we’re creating great characters.”

This role—”It feels like eating steak every day. This part’s more than I can finish,” she says—is a big break for the Bellingham, Washington native, who says she’s mostly played character roles previously, even having to wrap her chest to play a 13-year-old last year. “I know you wait your turn and hopefully I’ve waited my turn,” she says. It’s been a remarkably quick turn for this Northwestern grad who got her first job on the Chicago Shakespeare stage, then did Mamet’s “Boston Marriage” at the late great Roadworks (“I think it was their last show”) then a small role at Steppenwolf that got her an Equity card and she was off. She stayed in Chicago three years after college, then decamped to Brooklyn to pursue a career in film and television “while I can.” Still, she continues to work in town extensively, most recently doing Tom Stoppard’s “Rock ‘N’ Roll” at Goodman. She’s a rising star in Chicago, but still struggling to break into a career on the screen. She had a small recurring role on a soap opera for a while, and a small part in an upcoming film that may or may not clear the cutting-room floor. “I’m out pounding the pavement, passing out resumes,” she says. When I mention that her co-star knows a thing or two about making it in Hollywood, she says, “I know! He never talks about it though. He just wants to do the work.” As she says this, she makes something of a pensive, perplexed expression, as if recording a mental to-do note.

Petersen may be ignoring his celebrity but his fans aren’t: they’re flying in from all over and contributing to the beyond-sold-out status of the play, which has overwhelmed the Victory Gardens box office. Several have seen the show multiple times. “The other night, one of them cornered me and said, ‘Mattie, you changed the ending.’ I said, ‘I did? What did I do?’ She just said, ‘You know what you did.'”

As humble and gracious as Hawkinson is, it’s hard to imagine her life isn’t about to change in a big way. She hasn’t committed to a next project yet and this one doesn’t appear to have a future beyond Chicago, in spite of its success. It’s been done in New York already, as well as regionally, and her co-star has other commitments. Nevertheless, her parents must be proud—her mother was visiting when I showed up for the interview—if uncomfortable seeing their daughter in such a graphic and disturbing role.

“My dad, he’s a truck driver. When I got cast at Steppenwolf, he said he really liked that band. That’s how he is: A real down-to-earth regular guy. He saw this show and didn’t say anything at first, then just said, ‘I’m glad you’re with him.’ ‘Who, the character or Billy, the actor?’ I asked him. ‘The actor,’ he said. ‘You’re safe with him.'”

Some material just may not be suitable for parents.