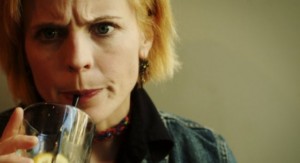 This may not be the analogy she was looking for, but Maria Bamford has effortlessly become the Dana Carvey of this decade. Nah, she doesn’t have a killer George H. W. Bush impersonation, but like the self-proclaimed “Master of Disguise,” she has in her comedic arsenal a myriad of characters, each with eccentric characteristics and distinct tones of voice, whether it be her mentally off and mumbling father, her superficial mother, or her arch enemy from high school, who says of her successful comedy career, “It’s just like in high school: you’re not funny, you’re just weird.” The former “Comedian of Comedy” star has crafted her routine with nonsensical ramblings and a self-deprecating biography, but it’s her incredible vocal work that truly sets her apart from her contemporaries. Oh, and she may not have a take on George H. W. Bush, but her impersonation of George W. Bush—as possessing the vocal attributes and motor skills of her pug dog—is pretty amusing. (Andy Seifert)