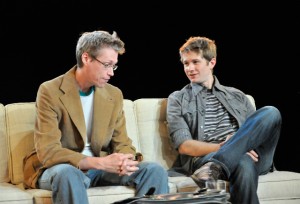 Steppenwolf’s presenting its fifth annual repertory of developmental productions in its intimate Garage space, but don’t let the “under-construction” imagery fool you: this is a terrific opportunity to see very promising new plays in productions helmed by topnotch directors that feature a mix of accomplished and promising newer actors on the scene. Sure, the sets are minimal and the plays still have a few spots yet to polish, but you might not have noticed if no one told you.

“Honest,” written and directed by ensemble member Eric Simonson, is an engaging exploration of the notion of truth in the kind of publishing world that produces James Frey and Jayson Blair. Though its questions are eternal, it posits them in a contemporary manner, even incorporating the machinations of identity theft into its mix. The cast is uniformly solid, with Erik Hellman’s turn as Guy/Tim in the central role of the chameleonic opportunist-turned-memoirist sensation especially compelling. 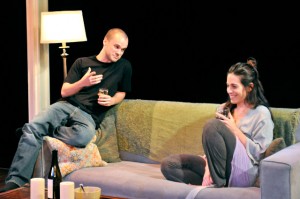 Playwright Laura Eason re-teams with her frequent directing collaborator Jessica Thebus to present “Sex With Strangers,  a polished two-hander featuring strong performances from both Amy J. Carle and Stephen Louis Grush as the generationally divided writers—he a young blogger turned publishing sensation in the Tucker Max tradition, she a frustrated novelist crafting beautiful prose for no one but herself—who unexpectedly fall for each other. Familiar dilemmas—Should the artist sell out? Can the sellout become an artist? —are juxtaposed against our self-revealing, social-networking culture of “nothing is private” with intriguing complications. Behind all these of-the-now explorations, it’s a warm and tightly rendered romantic work of timeless appeal. 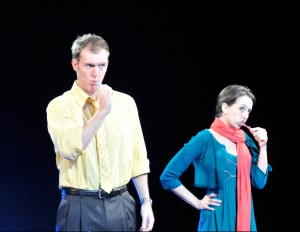 Laura Jacquim’s madcap “Ski Dubai” might be the most ambitious of the three works in scope and structure, but it’s also the one with the most unfinished roads. A fast-moving satire that somehow manages to skewer both green architecture and the impact of runaway wealth in the Middle East, while throwing in  a healthy dose of the absurdity of corporate America and even the intimacy of interpersonal relationships and a contemplation of the nature of “home,” this hundred-minute one-act is a bit like a slalom in the capable hands of director Lisa Portes: speed downhill, each turn kicking up a beautiful little snow cloud of ideas, and the occasional miss not consequential enough to undermine the overall beauty of the run. Hilary Clemens turns Rachel into a petite bundle of pleasant energy as she practically sprints around the stage;  Cliff Chamberlain’s Perrin is her bombastic foil with the heart of a lonely little boy.

Critics saw all three plays in a daylong marathon on Saturday. Though the premise was daunting, given the unfinished nature of the work, the reality was, instead, electric, a jolt of the promise for new plays in Chicago. (Brian Hieggelke)