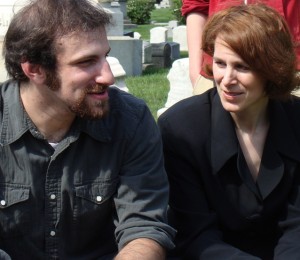 It’s a good sign that playwright Ellen Fairey avoids the easy Elvis references in her outstanding new play “Graceland,” now midway through its smash-hit world premiere at Profiles Theatre, since the Graceland in question is Chicago’s repository of the remains of the rich and the famous located not far from the Profiles storefront space rather than the house in Memphis that shares its name. Echoes of Elvis can be found, if you want them, in the musical obsessions of the recently deceased father of Sara and Sam, especially in the gospel hymns that form a sort of meditative soundtrack to the play. That Elvis is never mentioned in “Graceland” matters little, since the play has plenty to say about the weight of spirits of the dead on the living, burdens both real and imagined. Taking place in the cemetery and in a nearby apartment building (in a clever and economical set by William Anderson that manages to expand the tiny space’s geography beyond its physical limitations), the siblings process their father’s  demise in distinctly different ways. Sam, played with affable energy by Eric Burgher, is an underachieving stoner with a seeming disinterest in his father’s passing for reasons to be revealed. Sara, who saved her father’s last voicemail on her cell phone, seems overcome with guilt at all the what-ifs implicit in her father’s absence: What if she’d taken his call? What if she’d never left him to move to New York? Cheryl Graeff delivers a powerful leading performance as Sara (she took the role over mid-run), conveying the character’s essential sadness and lingering hopefulness in every line, even as she gets tangled up in a complicated and comical relationship with a rather strange duo of father, Joe, played by Darrell W. Cox as a charmingly smarmy midlife swingin’ bachelor (complete with smell effects, as his Brut cologne perfumes the tiny theater in one scene, a scent that speaks volume), and son, Miles, played with dazzling quirkiness and frantic energy by the teenage Vic  Kuligoski. In this ninety-minute one-act crisply paced by director Matthew Miller, Miles and Sara become soulmates, both haunted lonelies drawn together by the hopeful essence of youth. That life is ultimately a sad and lonely journey may not be an original observation to draw from the theater, but Fairey’s play delivers it with such grace and humor, and, most of all, hope, that it feels like the first time. Fairey finds a beautiful and uniquely Chicago metaphor for life in the presence of the Blue Angels crashing through our city’s air (and ear) space for a weekend each summer: their sounds disturb and disorient, like the cacophony of life itself, but the fact that the pilots synchronize not only their flight paths but their very heartbeats in order to survive says it all.  (Brian Hieggelke)