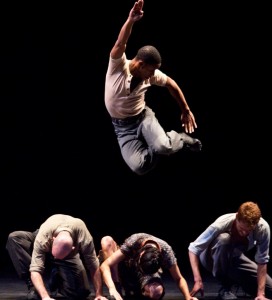 No matter how endlessly dismal the winters, you’ve really gotta love Chicago in the summertime; it seems like every band, dance company and arts organization in town plays the Pritzker Pavilion at least once, sometimes two or three times, gratis. Wander past that bandshell resembling a giant space insect sprung from the mind of Frank Gehry any time of any day and you’ll either catch a show or see the setup and rehearsal for a show to come. Even the Harris Theater has joined in the populist sentiment, hosting free “ticketed” performances of music and dance throughout the season. The mood is vibrant; Millennium Park has become the omphalos of the city’s summertime cultural programming and a remarkably successful use of downtown public space.

Next week, the park hosts the third annual Chicago Dancing Festival—four all-you-can-eat days of free performances by sixteen companies from across the United States. Tuesday at the Harris, catch River North, the Oregon Ballet Theatre, Aszure Barton & Artists and the Joffrey Ballet performing newish works by young, emerging choreographers. If you favor time-tested choreography, hold out till Thursday and see some phenomenal companies brandish the precious gems of their repertory in “Modern Masters”: Aspen Santa Fe Ballet do Forsythe, New York City Ballet do Wheeldon and Luna Negra, Limón.

The Harris shows bracket a Wednesday night lecture at the MCA by Ashley Wheater, artistic director of the Joffrey, who will dissect the anatomy of the pas de deux using three duets from the Thursday night show as illustration. Ideally, one could catch Wheater’s talk, ruminate overnight, and then see the full performance the following evening at the Harris. This type of audience education—more common in the classical music realm, in which musicians often preface performances with some background and analysis of the work—is refreshing to see in the context of dance. I, for one, hope the model sticks.

The festival culminates Saturday with a mixed-genre extravaganza in the Pritzker Pavilion. Steppers, tappers, ballet modern and classical—hot tickets you’d normally drop a Grant or two to see at the Auditorium (e.g. Alvin Ailey, American Ballet Theatre)—dance al fresco for the throngs on the lawn (a projection screen ensures everyone gets a good view). DanceWorks Chicago will be getting the crowd pumped throughout the day with three performances of Twyla Tharp’s audience-participation piece “The One Hundreds: 1-50.” Stop by the Bean at 3pm or head to the Pavilion early to get involved. (Sharon Hoyer)