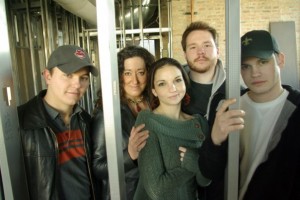 With a baseball cap, wife-beater and exposed tattoos, Stephen Louis Grush may not look like the typical artist, but he says that he can’t imagine what his life would be like without art. “You can’t underestimate the importance of invention. The chaos it creates is the closest we can come to something that’s good and meaningful,” says Grush, an actor, director and playwright who has already performed in leading roles at Steppenwolf (most recently as Ethan Strange in “Sex With Strangers”) only four years after finishing the theater program at Roosevelt University. Grush’s mother was a professional actress, meaning theater has always been a part of his life. “I literally grew up in the theater. There were always actors in the green room taking care of me, trying to keep me out of trouble. They never did,” Grush grins. As a younger man, Grush had a few run-ins with the law, and he brings that same brand of rebelliousness to the theater. As the founding artistic director of new-work theater company Thirteen Pocket, Grush believes in causing trouble by making theater. He produces current, gutsy plays about controversial topics, like sexual promiscuity and cannibalism, because he says that “without examining these things we cannot hope to grow as a community or as a people.” “The reaction doesn’t always have to be positive, as long as there is a reaction,” Grush explains.

Grush argues that American theater today will become “stagnant” unless there is a greater emphasis on new work and  wants to be part of “the next push,” moving theater towards a higher level. “We shouldn’t solely rely on the stuff that’s already worked. We need to progress, to evolve,” he emphasizes. That, Grush explains, is why he decided to team up with theater buddies from Roosevelt who shared his passion for progressive and provocative art. With projects that run the gamut from a literary magazine to an art gallery, Thirteen Pocket includes artists of various persuasions, all cooperating “to create something singular and unified,” says Grush.

Grush is currently directing Thirteen Pocket’s “Why We Come Here,” a short play about two young women who meet in a bar to discuss their love lives every night. Noting the candid way the autobiographical play deals with female promiscuity, Grush emphasizes how impressed he was that playwright Megan McGlone was willing to put herself out there, knowing that people might judge her. “Writing a play like that is like asking ‘Do you like me, or do you not like me?’ without being afraid of what the answer will be. It takes a kind of cavalier.”

Staged in Hamburger Mary’s at a real bar, “Why We Come Here” does not look or feel like your usual play. The audience is invited to eat and drink during the performance, and to sit at the same bar as the actors. The whole process feels rather like listening in on a conversation you were not meant to hear and that, Grush says, is precisely the point. He wants people to feel like they are invading peoples’ privacy, and to be aware of their desire to watch and understand other people. “We are all voyeurs aren’t we? Certainly all of us who come to the theater are… our want being to sit hidden and observe all of those intimate moments that people share with one another,” he observes. Grush confesses that he often finds himself laughing at other people, and then thinks to himself, “How many times has that happened to me?” and he wants his audience to ask themselves the same question. Watching the play, it’s  easy to forget that it is a play, particularly during the scenes featuring director of new works Caitlin McGlone (sister of the playwright) as the free-spirited lesbian Terra.

Thirteen Pocket’s ensemble director Laura Rook (Leah in “Why We Come Here”) explains that Grush’s experience as an actor makes him a very effective director. “He knows how to talk to actors because he’s been directed himself,” she says.

Grush says that the most difficult part of his job as artistic director is not the theater, but the business. Currently, Thirteen Pocket relies heavily on donations at fundraisers, but Grush dreams of a time when the theater will be able to pay for itself.

Even so, Grush, Rook and Caitlin McGlone are surprised to be running a theater company in their twenties. According to Caitlin McGlone, this could only happen in Chicago. “In Chicago, there’s the opportunity to do what we’re doing here and succeed. The fact that a group of 25-year-olds can do the type of work we are doing is amazing and it’s not something you see on Broadway,” says McGlone. Grush asserts that, because Chicago is a very “working-class city,” people here appreciate hard work. ”I haven’t done theater in New York, so I can’t really say what their theater community is like, but I can say that there’s a reason I haven’t gone over there yet, and that’s because I’m in love with this city and what it gives its theater performers.”