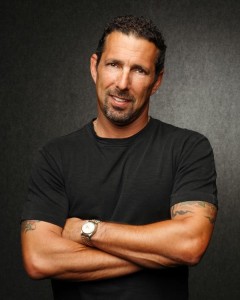 One of the few actually entertaining comedians to come out of season one of the classic “Last Comic Standing, ” New Jersey quipster Rich Vos has carved a niche out of acting like a doofus under the guise of that Colin Quinn-esque pseudo-tough guy attitude. Sure, self-deprecation is a common theme in a Rich Vos routine (“I stink” seems to be one of his most beloved phrases), but Vos mostly basks in buffoonery through his rampant mispronunciation of words—“Guanamo Bay” instead of “Guantanamo Bay,” “wookapedia” instead of “Wikipedia” and “paux fas” instead of “faux pas.” Dude’s even mispronounced his own name (“Rick Vos”). As an easy target for unrelenting ridicule, Vos has comfortably fit into the role of whipping boy in the “Tough Guy” posse (including Quinn, Jim Norton, Patrice O’Neal and company), but he pulls it off—his stupidity is endearing, and his simplistic comedy comes across as lovable rather than intellectually incompetent. (Andy Seifert)