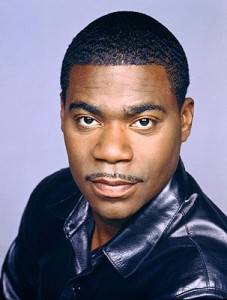 If you’ve ever watched an “SNL” show during this current “death rattle” phase, you’ve probably at some point thought, “What I wouldn’t give for some bizarre Tracy Morgan skit right now, just to get the blood moving in my brain again.” His absence from the current “SNL” cast reveals exactly what’s missing—a loud, large, self-centered party animal with absurd characters and boisterous tangents. (Kenan Thompson isn’t cutting it, and Andy Samberg could stand to gain 150 pounds). Morgan’s also the most interesting component of the relatively funny “30 Rock” sitcom, solely because he plays a character who’s ostensibly himself—“Tracy Jordan,” an unpredictable, boorish movie star that at one point tries to stab Conan O’ Brien. Given the fact that’s his real life ego has seemingly conducted a couple of interviews while drunk (on the “Late Show with David Letterman,” he claimed his ankle bracelet from a recent DUI arrest is “in the Smithsonian now”), there’s really no indication as to what erratic form of Tracy Morgan you’re going to see on any given night. And that’s just pure comedy. (Andy Seifert)