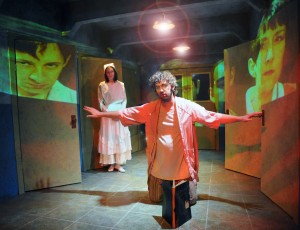 The wizard Prospero in William Shakespeare’s final play “The Tempest” is often seen as a metaphor for the Bard himself, that great “sorcerer” of the stage at the end of his career giving up his powers, i.e., putting down his pen for good.  But imagine a “Tempest” where the “powers” that Prospero gives up are all in his mind from the get-go, that the secluded “island” is his own straight-jacketed isolation in a mental hospital, circa 1940s.  That is the re-imagining, literally, of director Peter Robel in Bohemian Theatre Ensemble’s mounting of this Shakespeare classic.

Chris Pomeroy’s Prospero is neither all-knowing nor elderly—as he is usually portrayed—but an intense young man whose monologues have an improvisatory quality to them, as if he is trying on different ideas for size to see if they will fit.  The text can support this interpretation admirably, as Prospero begins the play seeking revenge but comes to see how destructive a course that is.  He has created such a powerful world of his own that the hospital staff becomes caught up in it: both Miranda (Rebecca L. Mauldin) and Ariel (Stephanie Sullivan) are nurses taking care of him, but whereas Miranda is an empathetic and compassionate Florence Nightingale, Ariel is a walking nightmare who uses Glenn Miller music to control patients and sadistically turns them against one another from the sidelines and watches the resulting physical altercations for her own amusement.  Caliban (David Tibble) is a confused doctor who revels in experimentation and becomes seduced by alcohol and goes and drinks with janitors and orderlies, and the shipwrecked crew are escaped patients.  (When we met them, we hear an instrumental of “Stormy Weather” playing in the background on the hospital radio.)

Where imagination and reality, sanity and insanity begin and end are constant questions in this interpretation, and it becomes a suspenseful funhouse whodunit complete with distorted mirrors and dead-end mazes to unpack the labyrinth of mind games within mind games.  Clearly, Prospero has been traumatized by an immense loss that he could not deal with, and part of his coping mechanism has been to create an alternative reality.  Given that the play itself is a mind creation as is everyone and everything in it, the boundaries of the real and the non-real get turned upside-down, an effect made even more intense by the intimacy of the space.

What makes this superimposition work so well is that the text itself supports it so consistently and cleverly, which for instance, was rarely the case in Steppenwolf’s epic kitchen-sink rendering of “The Tempest” last spring; spectacle and entertainment values aside, much that happened there was eisegesis, i.e., reading into the text, rather than exegesis, taking out of the text.  Whatever you want to make of the BoHo interpretation—and it does have many uncomfortable moments more like making your own way through a contemporary haunted house than an uplifting night of Elizabethan theater—its anti-vision stems organically from careful exegesis and, like it or not, the disturbing trip works.  (Dennis Polkow)