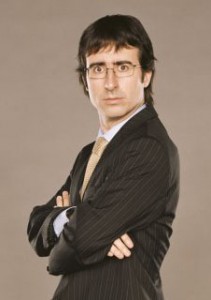 It’s not easy being British, or so says John Oliver, the “Daily Show”’s senior English correspondent, who grew up in Liverpool but has crafted his act around the tortures of being an Englishman in America. Poor John Oliver can’t walk into a history museum without feeling a deep, eternal guilt within five seconds for the centuries of brutal domination that his country exerted, his only consolation that “one day all this shame will be yours, my American friends, for you have taken the baton of imperialism from us and you are running with it quite impressively.” If it’s not guilt, it’s the opposite: the indignation that Americans don’t adequately recognize that his country was the scourge of the world, that some would consider the British Empire’s innovative torture and murder methods to be less tyrannical than Obama’s three-percent tax hike. Oliver’s smart, biting wit and clever satire don’t go wasted—with nearly a decade of stand-up work (and television) under his belt, Oliver’s just as much a charismatic performer as a goofy satirist. (Andy Seifert)