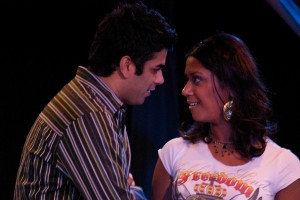 An uneven but charming series of one-acts about the South Asian diaspora that deftly overcomes stereotypes of victimization and the American dream but gets undermined by increased sanctimoniousness throughout the night. The plays’ ordering is astute, moving thematically from immigration to working to the fallout of expatriation for later generations. The first, “Instant Recall,” is funny and compelling, playing cleverly on the concept of immigration by placing a South Asian newcomer on a cruise ship, where she confuses a British passenger with her selective memory and non sequiturs before revealing her quiet tragedy. “Night Shift” pits the Indian daughter of a hotel owner and the world-weary white woman who works the night shift against a bigoted and threatening (white male) client. It’s the weakest of the three, taking easy shots with hackneyed writing and excessive sentimentality. The final play is the most fascinating and also, at times, the hardest to watch. “Midnite’s Vultures” is also the longest by far, and features, among other trippy events (the main characters are on peyote, by the way), a man dressed in the costume of Apu from “The Simpsons,” dispensing wisdom on the oneness of it all through a character’s Blackberry. The story centers around two Indian-American young adults who meet up on Craigslist, ostensibly to have sex, but who end up in a Midwestern cemetery lecturing one another on their heritage and place in the world (or lack thereof), through dialogue that’s both preachy and painfully hip. The playwright Pushkar Sharma is a spoken-word poet, and he indulges himself by having the characters perform spoken-word poetry for each other ad nauseum, which gets boring almost immediately for an audience. Lavina Jadhwani directed all three plays, and one wishes Rasaka had mixed it up more, given her mannered heavy-handedness. Acting is generally a bit overwrought but consistently energetic, and it’s technically polished, with smart musical transitions (like The Clash’s “Rock the Casbah”). (Monica Westin)