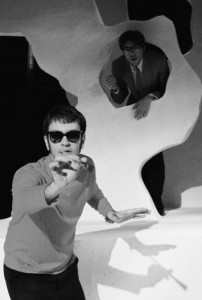 There’s an interesting germ of an idea in “Ekphrasis” about how absurd it would be if we projected our modern conception of art and the artist back through art history; in an early scene, an unenlightened cave woman asks her husband, who says he can trade his stick figure drawing for meat, “What will happen if everyone wants to be an artist? Who will kill the bison then?” The play follows with ridiculously inaccurate imagined stories behind famous images from art history, from Whistler’s mother whining throughout her portrait sitting that she’d rather be in the nude to Leonardo da Vinci’s drunk frat-boy friends making fun of him for getting such an ugly model for the “Mona Lisa.” The show has potential both for humor and a subtle confrontation of our current art festishes; unfortunately, it realizes neither. It’s a fundamentally unfunny production, where jokes are crass and awkward; and by the time we get to the final scene, in which we find Andy Warhol screaming that he hates his life to his painting (yes, painting) of a soup can, it’s hard to feel that much thought has made it all the way through. (Monica Westin)