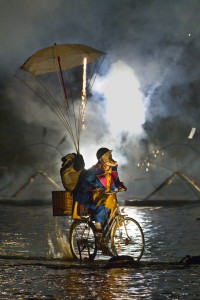 This weekend Chicago Shakespeare brings its latest World’s Stage production to Navy Pier—but this time, the show takes place actually on the waters of Lake Michigan. The French street-performance ensemble Ilotopie has performed their fire-and-water performance spectacle “Water Fools” on the waters of the Seine and the Thames, and in the words of Chicago Shakespeare executive director Criss Henderson, “We thought that Lake Michigan should be counted among such aquatic venues.”

Ilotopie is known for their site-specific performances in public spaces all over Europe, but their pieces are also about the constraints of the theatrical. “Water Fools,” which incorporates monumental boats and fire, is both about dramatic expression and the position of the actor experiencing “technical difficulties” in order to “keep… his liberty of movement on the liquid element,” according to the ensemble’s statement.

Newcity talked with Henderson this week to hear about his hopes for the performance.

Ilotopie seems to be a company interested in both spectacle and in making new use of public space. I can’t help but think that, having made that huge decision to move Chicago Shakespeare to Navy Pier, you’ve also been asking questions about how space affects programming. How would you say their outlook works with your vision for the World’s Stage?

Well, when we came out to Navy Pier it was not lost on us that this entire pier and its surroundings would be and could be our stage. It’s such an incredible site that to limit the work to the four walls of the theater wouldn’t have made any sense. Last summer’s Transe Express aerial show at the front of the pier was extraordinary as a way to engage an audience. Then last summer I found myself at a street-theater festival in France, which is where I met and saw the work of Ilotopie, whom I’ve been following because they’ve played so many of world’s great theater festivals, and I was taken with what I’d seen. I knew it was a follow-up to Transe Express, which was all about air, moving to the water of the space. Our hope is that what the World’s Stage tries to do is to introduce the finest artists from around the world without discrimination to form or content. In particular, I’ve learned a lot about performance in France in the last six years—in America we just don’t get that kind of work with spectacle, or that opportunity to experience a company that comes together, makes an audacious process, and then plops them into challenging places.

I know what you mean about spectacle. It seems that so often when we’re seeing companies doing spectacle, it’s quarantined, so I’m excited that this company seems really interested in getting guests involved ‘sharing performance with spectators.’ I’m wondering now how that can happen at Lake Michigan and Navy Pier—and for that matter, how the show will end up looking.

(Laughs) Well, at the moment, it’s a bit hard to picture. When we looked at water around the pier we had some choices, and in the end we decided that east end of Navy Pier was the most interesting and most manageable parcel of water, so what we’re going to do at the end of pier is construct riser seating for a couple thousand, with a standing room in front of the risers, places for hundreds to sit on the ground. It will certainly be performative and a spectacle! But yes, you’re exactly right, this is a piece that is in some way performed and discovered because it has a broader sight-line. Here we’re limited by the square footage at end of a pier. This is what the company does with their work—to work with the space and in the streets and public places. The quarantine is the problem, and in a way, Navy Pier is also quarantined to some extent, in that it has a strong identity in and of itself. The piece is going to be at a massively larger scale, certainly… but I think that’s what I love about the French street-theater movement—the knowledge that place and audience and work are one. I’d just as soon not have the audience on risers, but then we wanted to afford as many people the opportunity. In any event, I can guarantee that the show will be surprising. In fact we can’t know what it’s going to be.