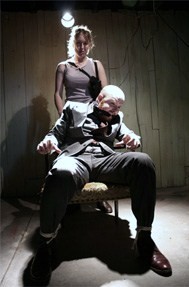 “Ulysses’ Crewmen,” the new two-person show by Milwaukee-based Insurgent Theatre, is touring the country this summer and fall, with a stop at the Mess Hall in Chicago on September 1. The play centers around the kidnapping of a U.S. delegate to a trade summit by an an anarchist revolutionary. The play deals explicitly with class struggle and exploitation, which isn’t surprising, given the company’s insistence on its own brand of DIY art as revolutionary practice, as its Web site promises: “Always independent local writers, directors and actors. Never compromising to the establishment.” Newcity talked with Ben Turk from  the road about political art and translating his beliefs into theater.

You mentioned in another interview that despite being political, the meanings of your shows aren’t cut and dried, and that you’re not advocating a certain action. You also said that the message of “Ulysses’ Crewmen” isn’t necessarily in the content, which makes me think about Walter Benjamin’s comment that you should make art politically, as opposed to making political art.

Yes—basically the content of the play is about something that I think is interesting, that our audiences will hopefully think is interesting. It’s political, because I find politics interesting, and theater is supposed to be entertaining, but the most entertaining thing isn’t the dramatic emotional thrill ride—what I engage with more is things that make me think. We try to make work that’s provocative to an audience on an intellectual level, using some Brechtian formal techniques to make the audience remain objective. We don’t think we’re going to cause a revolution by talking about these things, just offering questions to think about.

What kinds of questions are you hoping to invoke?

Hopefully they’ll be fairly explicit. The play puts an anarchist figure in a sort of trapped position, and the first question that’s raised has to do with violence, the question of whether or not you can be nonviolent in a society like ours, and what it means to undertake nonviolent protests when everything about our daily life is to some degree based on violence. The second question would then be, so, if we give up on nonviolent protest and instead try to undertake direct action, how is that direct action going to achieve anything? How can you confront a system as big as capitalism as an individual, and what methods can the individual use? Radical change or moderate form? Direct action or symbolic demonstration? We situate the protagonist in the middle of these questions and don’t let her find answers, hopefully leaving it up to the audience.